Showing posts from July, 2007
Show all

The tour is over, and my D-boys did the job. Where they'll be next year, who knows? I still find it hard to believe that Discovery is rumored to be dropping out of the TdF after just a few years of sponsorship. What's the problem though? It only costs $15 mill to staff a team of Discovery's stature. :) The rumors so far have the best team members re-forming under a new team, so all won't be lost.

Contador did awesome and Leipheimer had the best ride of his career. I'm tired of folks saying, the only reason Contador won was because Rasmussen was allegedly doping. Regardless, doping creates a synthetic performance; Contador's performance was natural, thereby warranting him the true winner in every way. Enough said.

My boy George Hincapie, as usual, pulled his weight for the team this year, but I really would have like to see him have a stage win. Hopefully he'll get to experience that again one day.

I'm not sure I have mentioned just how great it feels to be able to do everything... but it does. It's simply amazing! Of course I have; silly me. Well, you'll have to hear it over, and over, and over again for a while!

I know I worked hard pre-op, but heck, any 300+ lb. person taking spin class does! This just feels different. It's like I can actually feel my body getting stronger. I did damn near every jump, hover run and sprint. For the first time back, that's pretty good.

I will say though, that after class I felt extremely weak, like I never had before. Luckily I was armed with a banana (a good glycemic replenishment), and I felt much better.

I have been so fortunate in that I was able to seize the opportunity to have my life back. God, I'm so thankful for having the surgery.

Tonight I have a strength t…
3 comments
Read more

July 24, 2007
Thanks to all my sassy sisters who helped make a contribution to my Tour de Pink efforts. You gals have character; you walk the walk AND talk the talk. I thankfully accept your donations in celebration of those who have lost the battle to Breast Cancer, and on behalf of all the folks who will benefit from this fundraising effort.

So, to change the subject, guess what I'm wearing today? I'm wearing a size 16! Not just a 16, but a 16 in white. White?!?! Yes, white. :) It's a nice black and white outfit, if I do say so myself. :) The point is, I haven't worn white since my wedding, and before than since my 8th grade graduation! Actually, I think I might be smaller now than I was at my 8th grade graduation!

Oh... and I have my consultation for my implants. Whoopie!

Yes, but not those kind. I'm talking about DENTAL implants. I started the process right before I got my RNY approval. I thought I'd have a year to finish up, but never even got…
2 comments
Read more

On Saturday morning I returned to my former gym and took Step Class. I really missed my old class and decided that if I really like it that much, and it helps to vary my cardio, it's worth the $47 a month. I absolutely adore the teacher. She's challenging, motivating and fun -- and yes, she's the reason I re-joined. The GroupX teachers at my 24 are pansies compared to her.

I just have to say, I HAD SO MUCH FUN! I hopped my way through step like I never did before. Don't get me wrong, my heart rate was hovering between 172 and 178 the whole time, but I felt so accomplished afterwards!

Funny story: a lot of the people at my local "Y" are teachers in CCISD. They all know one another. If you live the the Bay Area and aren't a teacher, then most likely you work for one of the DOD sub-contractors or at NASA. I work at neither so it took some time to make friends and penetrate what I lovingly call the "fitness …
Post a Comment
Read more

July 16, 2007
With all that's going on, I forgot to mention that the Tour de France started last week. They're already in Stage 9 today I believe. Thank goodness for Tivo, or I would never get caught up.

I'm all about rooting for team Discovery, but I am disheartened already. It's a long tour and I know anything is possible -- I'm just waiting for their attack. George Hincapie is my guy to root for. Probably won't win the Yellow, but I'd like to see him win a stage and see the team do well overall without the "Lance" factor.

I know they're focusing on the team time trials (which I always love to watch because that's where you really see the teamwork) and the stages in the Pyrenees.

Okay, I don't normally solicit anything, but I'm about to do so. I'm currently registered for the Tour de Pink. It's a cycling ride benefiting Breast Cancer. Without going into heart-wrenching stories, I have been touched by 3 women in my life who either died, beat or survived Breast Cancer. What I really need is your help in the form of a contribution to the cure. Please visit my contribution website sponsored by P3=Pedal Pink Power and Compass Bank.

Remember your donations are tax deductible. Your donation doesn't have to be huge -- every couple dollars helps! If you already contribute to another Breast Cancer organization, then thanks a million times over.

Feel free to pass the link to my contribution center on, if you know anyone who is open to the cause: http://www.tourdepink.org/site/TR?px=1078101&pg=personal&fr_id=1060

Please note, if you're using a browser other than IE, you may find that end of the URL may be cut-off -- simply go to the li…
2 comments
Read more
July 11, 2007
There is a woman in my office who in the past struggled to have approval for the surgery -- ironically enough her name is Donna. She didn't know I had the surgery when she started telling me about her experience. I could soooo feel her disappointment. The whole conversation started because during some lunchtime chat I said, "I am no longer Diabetic." She wanted to know how, and my first response was, "I lost weight; I exercise and eat right." Which, of course, is true.

However I felt compelled to tell her the whole truth, but I had no doubt it would be kept in confidence. Sharing my story prompted some questions on her behalf and I could tell she feels some bit of hope... even if she has to self-pay.

It felt good to give her even just a little hope.

Yesterday I had my 6 month (late) post-op follow-up. All labs were fantastic and my weight loss is fine. I had brought with me my charts from my training session that track everything, and of course they explai…
1 comment
Read more 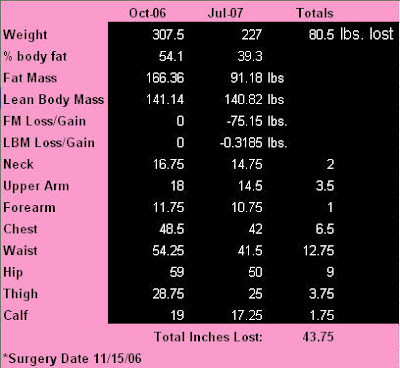 First thanks goes to JenO for her recommendation of PB2! I love this stuff, and have shared the good news with other fellow peanut butter lovers. :) Seriously, my trainer is diggin' on it, as well as members of my surgeon's support group! They're even giving it away as door prizes!

I've been watching Big Medicine, mostly because I know a couple of people profiled, since they film it here in Houston. Tesha was my roomie for the Austin event and I've met Ramon via the OH Texas Message Board gatherings. Both are most excellent people, and I'm so proud of them for sharing their stories. Incidentally, while at the conference someone asked me if I was Tesha's MOTHER! Holy sh*t! Do I look old enough to have a 25 year old daughter? Never mind, don't answer that!

Also on the Big Medicine link is a question and answer section by Dr. Mary Jo Rapini-- she has some great books listed for self-help issues with food addiction. I love her attitude towards accountability…
6 comments
Read more
More posts