The tour is over, and my D-boys did the job. Where they'll be next year, who knows? I still find it hard to believe that Discovery is rumored to be dropping out of the TdF after just a few years of sponsorship. What's the problem though? It only costs $15 mill to staff a team of Discovery's stature. :) The rumors so far have the best team members re-forming under a new team, so all won't be lost.

Contador did awesome and Leipheimer had the best ride of his career. I'm tired of folks saying, the only reason Contador won was because 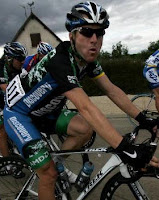 Rasmussen was allegedly doping. Regardless, doping creates a synthetic performance; Contador's performance was natural, thereby warranting him the true winner in every way. Enough said.

My boy George Hincapie, as usual, pulled his weight for the team this year, but I really would have like to see him have a stage win. Hopefully he'll get to experience that again one day.

It still baffles me that some of these guys think they can get past the testing. I mean seriously, coming off one of the most controversial years, with Floyd Landis being (the last TdF Winner) accused of doping, you'd think the offenders would lay low for a year -- but no. They're selfishness obviously supersedes their respect for the sport and those they ride with.

The tour is over... now back to my regularly scheduled TiVo programming.