Will They Ever Learn?

If you know the Tour de France organizations have bloodhounds on a doping hunt, do you dope-up?

Where is the valor in winning this way? I just don't get why accomplished cyclists would go to this extent for bad press? Or is it just bad press is good press?

It should be noted that my boys in blue are still clean; Team Columbia. They're "here for the sport, not the politics." As Cavendish said. And that's why I like them! 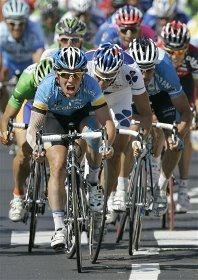 NARBONNE, France July 17, 2008, 11:20 am ET · Mark Cavendish of Britain has won the 12th stage of the Tour de France. His victory came hours after the race was thrown into chaos with a third doping bust.

Italian rider Riccardo Ricco was detained by police before Thursday's stage. He is the third person to test positive for the performance enhancer EPO. Ricco's Saunier-Duval team withdrew from the Tour and suspended all its activities.

Cavendish has won three stages in this race. He led a group sprint to the finish in the 105-mile ride through rolling hills and plains.