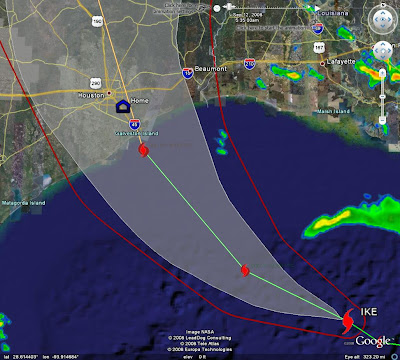 Being about 25 miles from the coast of Galveston, we're ready for Ike. See the little blue house? That's us, courtesy of Google Earth. :)

Of course the media is somewhat sensationalizing it. Go figure. Not that we're not going to have messy rain and lots of wind, but this isn't Katrina... or even Rita (for which we did have to evacuate).

Punkin's daycare was closed yesterday (and today as well). I brought her to work with me and my nearly four year old help me secure my company's technology infrastructure. :P "What's this button, Mommy?" LOL

On my drive home (which was freakin' awesome -- no traffic going South!) I was surprised to see how many major businesses had boarded up. It's just weird to see. I had filled my tank the day before, so I didn't have to deal with finding a station that had fuel. Stopped by the grocery store and picked up some last minute items. The store was crowded and people were literally buying stuff by the cases and clearing the shelves with their arms into their cart. "No canned chili for you!"

Hubs came home from work early, as his jobs operations closed along with NASA (he works for a subcontractor), since they are in a low-lying, mandatory evacuation zip code. He worked with our neighbors to get our houses boarded up. Some of us decided we're going to band together and hunker down for the night. We'll be Wii'ing it up tonight (for as long as we have power) and making the best of being couped up.