November 23, 2008
I left Houston on Friday afternoon for a leisurely drive to Dallas. It's about 4 hours from city-to-city and then another hour or so to Denton, TX where the Turkey Roll was to be held

I stopped by my old office and shared coffee with a couple of long-time friends who are former co-workers at the compay that laid me off a few years ago. Our meeting must have been destined though, as minutes before we met one of them he found out that the board had just voted out the CIO who was responsible for orchestrating projects, which led to significant losses, which led to layoffs for IT.

Feeling how cold it was I knew I needed some gloves for the ride on Saturday. I had forgotten how cold my ears got too, so I made 2 trips to Richardson Bike Mart. Met up with the Cycling Chick Extraordinaire, Coco and WonderTwin Mama Alana and had some dinner and headed to the hotel Got my gear... I was good to go

I knew there was a possibility it would be cold... but I had no idea it would be as cold as it was. I rode in the Frost 50 last year, and I don't think it was this cold. Let's just say that by noon it was a balmy 44 degrees, according to my car -- it was easily 30-something (I heard 34) at 9am, the ride start

Let me be clear. There is nothing fun about riding in cold weather. NOTHING

It could have been a nice ride, but it went sh*tty only because of the weather. We cut our distance short and did 23 miles; a lot of folks were too. No sense it turning something you enjoy doing into something you hate -- there's nothing to prove. It's all in fun.

On the upside, I got to see Courtney, see Corinna do her first ride and met Larry, the grumpy the Kiwanas information man. LOL

Here are some pics... and yes, it was as cold as it looked! My face is wind-burned today:
Me & Courtney (aka Cycling Chick) 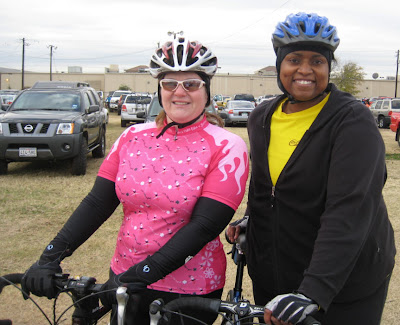 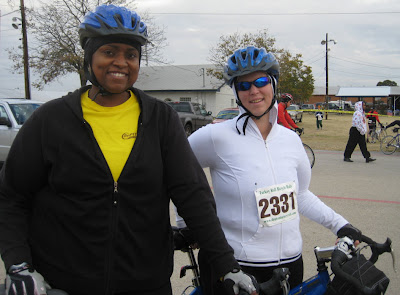