On the Flip-side of the Hump Day

January 08, 2009
I actually set-foot in the gym yesterday, for non-cycling cardio *gasp* and strength training *gasp*gasp*. I know. Hard to believe, but it's true! I saw my former trainer at the gym and of course he had to make a big deal, by yelling my name at the top of his lungs...followed by, "I'm happy to see you here." Do you think he was trying to tell me something??? LOL

Of course it doesn't surprise me that I feel pretty good today; amazing how that works. Plus I slept through the night and didn't wake up but 2 minutes before my alarm went off!

I am , however, considering waking at 4am to hit the gym; change up my schedule a little bit. I'm not sure how this would work schedule-wise, but if I can be home by 5:30 to wake the Cassinator, it might work for me. I might give it a go next week and see. I would just have to go to be a tad earlier the night before -- but I have to make this a priority, as it should be.

I am officially registered for the Frost 50 this morning, and am going for the 55 mile ride. I'm not sure I'll have any partners in crime for this event, but April and the Ms150 comes quickly, and I want to be as ready as possible.

The other day, instead of the gym, I took Cassie out on her bike. We went around our neighborhood and it's 1.1 miles. My little "cyclist-in-training," managed to ride her bike the entire way! Of course we did have to stop to check out the trees, the flowers, the ant hills and the cracks in the sidewalk. But she did it! That's a good distance for a 4 year old -- let alone her keeping interest. She wants to do it again, but next time wants to ride to the "Blue Park" (where there's a blue playground apparatus). That's a little farther distance, but we might try it this weekend. If she keeps it up she'll be ready to do the Space Race's Family Fun Run/Ride!

On keeping accountable, yesterday I nixed my afternoon protein shake (have I said how much I hate the Nectar Sweets Vanilla Bean Torte?). At Dinner I had some of my turkey meatloaf instead of chicken, and for my evening snack I had some Fage 2% yogurt with a little crushed pineapple and a sprinkle of coconut... I also added some splenda and vanilla and it tasted like ambrosia. I think I will play with this as a recipe, for sure.

Here's the plan for today (click to see the full-size version). Pretty much the same for most meals, but for lunch I'm having one of those Campbell's Healthy Harvest light soup varieties. It has less sodium (not no sodium), at 480 mg per serving. Could be better... could be worse, but I hate the 0% sodium soups more than Vanilla Beat Torte Protein. I toss in a can of chicken breast for some more protein and substance. 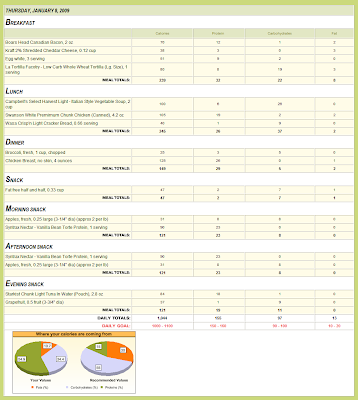 So not much else going on but waiting for my protein to come, along with my new shaker cups! Oh! I found a clearance sale on 20 oz. Blender Bottle Shakers; a 2 pack for $9 and some change. They're the perfect size; not to big and not too small. I've had my Blender Ball cup for about a year now and it still seals perfectly.