February 28, 2009
I've been MIA this week because all things seemed to be going against me. Though I will say, it could be worse. :)

On Friday I picked my car up from the dealer and it was supposedly fixed. I wasn't really happy with the answer, but figured at the least they've managed to fix the problems in the past, so at least the issues would be resolved.

Saturday Cassie and I drove, in traffic, to Montgomery (78 miles from home) to pickup a Specialized kiddo's bike. Mommy has a Specialized, so Cassie has to have what Mommy has (that's the stage she's in right now). We got the bike and Cass loves it (No problems with my Jeep either) 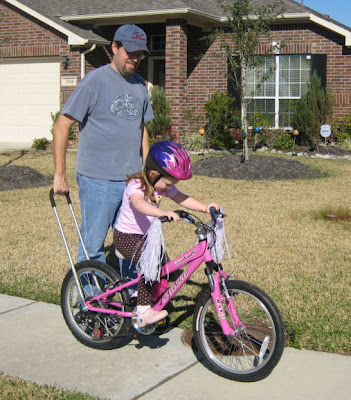 Sunday I took a run to the local Target'; came home and it looked like my radiator was urinating... Ugh! Not. Fixed. F!

So, given the state of my vehicle, I would have to drive my husband's monster truck to work. I hate it... though admittedly I did get somewhat used to it by the end of the week. The warehouse guys were obviously hot for my ride... it was pretty funny rolling up in my lifted 4x4 diesel "chariot" and makin' their heads turn. LOL

I make it to work in one piece and even get to the gym at lunchtime... but come Tuesday, it was all downhill, beginning that night, when a hard drive died in one of our servers -- this took out both email and data. We lost a full day's worth of Data (The server just couldn't wait to fail until AFTER the backups). Oh, well... it's what I get paid to handle. Still, it stinks.

Sooooo 2 days later we're recovered from the technology issues... I go into work on Friday thinking I can breathe a little easier, but then what happens? I arrive at work at 6:30... my co-worker comes in a 7:30. She says to me, "you probably know this already..." I say, "What?"

"That big ol' truck of yours has a flat."

I had to have the truck towed and Darren had to come to work to go with the tow truck to the 4 Wheeler store to get it repaired. This left me stuck driving a convertible TransAm we borrowed from his buddy. Ordinarily I might welcome the chance, but this guy treats this car like a trophy. Oiy! It kinda takes the fun out of driving it, know what I mean?

I go pick Darren up at the parts store, take him home to grab his laptop (because technically he's supposed to be working from home this day), then drag him back to work with me. Of course by the time we get there, the parts store calls and they're done with his truck. LOL

So... Saturday comes and I'm working on very little sleep, given the week's events, but still I got up to meet a friend at the local 24 for some spin-and-gym fun. I hadn't met *E* in real life yet... we just make exchanges through email and Facebook, so I was looking forward to finally meeting her.

I get to the gym right at 8, drop Cass off at childcare and grab a spin bike. After I got setup I grabbed one for *E*, since I had not recognized her among the class yet. Well, as it turns out, sign-up is required for the class on Saturday morning (I didn't know... so I didn't have a number). Class was full and I was almost booted until a pregnant woman (who had signed in) gave me her spot -- I still though *E* wasn't there... as it turned out, she was booted from class. We missed meeting again. :( We'll catch up eventually. I staed and took the 24 Lift class after. Suffice it to say I kicked my own a$$

I get home and am greeted by a very frustrated Hubs. He was home working on my Jeep. He encountered trouble and long-story short, we have to get another new radiator. He wasn't happy.... not one bit. :( I wouldnt be either!

So, as you can see, it's been a comedy of errors all week long. Just had to vent. It's supposed to be in the 30's here in Houston tonight, which is, well, JACKED UP; no oudoor riding for me tomorrow -- probably just swimming.