This was the first time in 25 years any part of the MS150 had to be canceled -- figures it has to be on the 25th anniversary of the event. The cool thing was that 11,000 of the 13,000 registered riders showed up to play in the hills, wind and bike grease... and there was lots of bike grease. For some, more than others. LOL

E and D offered the use of their RV for the event, and it was the way to travel! I'm so grateful! We managed to leave Houston before the torrential rains on Saturday and arrived safely, with D's superior driving skills... I think he must have been a bus driver in a previous life; he takes it *very* seriously. :) D is E's husband... and now our "Rider Support" dude. 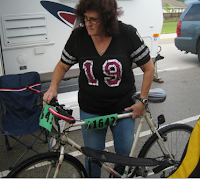 We made it to La Grange and just chilled on Saturday night. Doug made us some sketti and meatballs (YUM!) We went into town and took a walk -- La Grange's population is 4,400, so 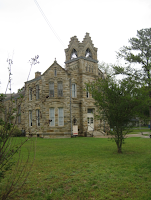 there's not much to see. But we found this home decor/custom jewelry store that we loved. I picked up and *MS75* souvenir, in the form of this handmade cuff, studded with freshwater pearls. It is so unique; I love it!

So, the next morning was the start of Day 2. We headed out at about 7:45, and opted not to go through the official start, which proved to be the right choice because we heard later that people were still waiting to 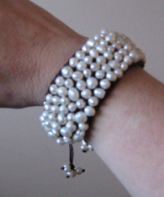 start at 8:40 am. The winds were bad; and they were expected to get worse (and did) as the day went on.

E's Cousin led us out safely to the course and then we were on our own. Not even a few miles in we said a rider down... it didn't look good. The good thing was the MS150 support folks were right there, taking care of him. Their SAG support and volunteers are the best.

So, I already mentioned the wind, right? It was very, very windy. When you have no hills to train in, and have to combine 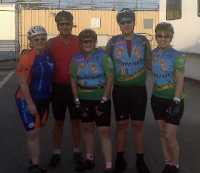 hills and wind, it makes it challenging. Last year everyone said the wind was the worst ever (they usually have tail winds going in to Austin), but this year felt twice as bad to me -- I mean, we didn't even have a Day 1 ride, and Day 2 was killing me! I just knew it would be a long day.

I ride along, enjoying the sites while cursing every single flag I see flying full-out in the wind (which I'm riding into) and I try to remember to be in the moment. Be present. Really recognize what is going on. The scenery is mostly green and lush, and I'm physically able to ride... and ride decently.

Along the route are volunteers... cheerleaders. People who just sit out on their lawn chairs and scream moral boosting support. But there are those few that really get to me and I'm definitely touched. There was a woman sitting on the tailgate of her minivan with a sign that simply said, "Thanks for saving my life."

I teared up... got snotty.. the whole nine yards. She's why we're doing it! We struggle to get through the ride in the wind. They struggle for their life; I'm sure at times it feels like they are walking into 20 mph headwinds every day.

As quickly as I am reminded of why we are here, I got my first flat (God is funny that way, I think LOL). Rear tire of course (even funnier still, I think). A Ride Marshall comes by about 10 minutes later and says, do you know how to change it? I said, "I can change the tube and tire, but have problems with getting on the rear. He said, "I'll take it off for you, but then I'm on my way."

Anyway, that's exactly what he did. 30 minutes later I finally got the tire back on -- and during that time no other Ride Marshall passed. I felt like George Hincapie with an eff'd up mechanical stop that cuases him to lose it all! Admittedly though, I felt good when I was finally able to get the tire back on. :) Thanks Darren -- my tire changing coach. LOL

So I make it to Lunch.. it's sometime between Noon and 12:30 -- I roll in and quickly grab my grub and pop a squat on the lawn. I finish up in like 20 minutes and head back towards my bike. The wind was only expected to pick-up and get worse throughout the remainder of the day, and it did.

Here's something for the totally weird category though: I know in sports athletes get comfortable around one another. But the MS150 is a FAMILY event.. you know, G rated. I get back to my bike and the guy next to me makes small chat, "How's your ride going?" then he opens a package of chamois butter with his teeth. I am thinking (sunscreen?). I tell him, Okay... could be worse, blah-blah-blah. He responds with more blah-blah-blah (and seriously that is what I heard) as he proceeded to slather his privates with the butter right in front of me. He's sticking his hands down his shorts, right there, applying it his "package" and butt.

I was sort of laughing inside, but a little taken back too. To world has all kinds, I figure.

Down the road I go... make the next rest stop a quickie and leave. I get a quarter mile from the rest stop and I have another flat! And guess what? It's the rear. AGAIN. So I pull over on the side of the road, where I came upon a this small RV, a white-haired man, his wife and their beautiful Somoya, Daisy. They were so sweet and helpful. Carl is a member of the 300 club -- that means he's one of the MS150's top fundraisers. His wife follows him with the RV along the course and gives him private rest stops. Carl joked and said it was because if he stopped at the regular rest stops, that he would talk to much (I believe it after talling to him) and never finish the ride. LOL

I enjoyed their company (and Daisy) for a bit and then got the tire changed in half the time of the first. Yay me!!

Whatever I did, I screwed up the derailleur... I couldn't shift gears without losing the chain. I had to deal with it until I got to the next rest stop for support to check it out. 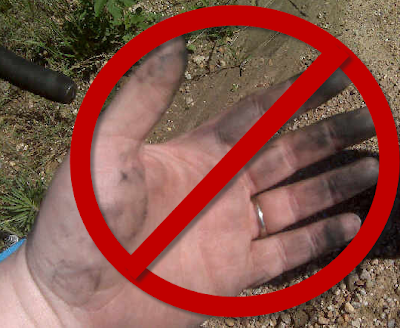 It was quickly becoming no fun at all. Seriously; I think this event defined what my level of fun is: 40 to 60 miles max. And even at that, after 40 miles I'm getting bored -- it's not really the training, having stamina or the hard work. No one can accuse me of be "afraid" of training hard. I'm like a tug-boat... I can chug and pull all day, it just gets boring. When I get bored, the idea of crossing the "Finish" loses it's excitment and it's just the last step in getting it over with and not a victory. That said, the MS150 is an awesome cause. So I guess I should never say "never", but it certainly won't be anytime soon. LOL

After I got my bike checked (I had knocked the derailleur out of whack when I turned the bike upside down to change the tire) I decided wind up SAG'ing 8 miles; I just needed to collect myself. I was frustrated, covered in grease from hands to ankles and not having any fun. So on the bus I just thought about all the reasons why I was there, in that place, at that particular moment in time, connected to all these people through this common cause.

I hopped off the SAG a little refreshed and finished out the last 15 miles of the ride. I made it into Austin sometime around 4pm. Not a stellar performance. I thought I was going to do so well, considering I made it into Bastrop for lunch between Noon and 12:30. It's not a race though; it's a ride.

A (E's son) crossed the finish behind me at around 5. then L, then E. I think I was so happy to see them finish!

I think this ride solidified for me what I kinda knew, but wouldn't totally, 100% commit to knowing, was that long rides aren't my thing. In spite of knowing how to spell the word "derailleur" I really can't claim myself a "cyclist" (what do you expect? I do "ride like a girl.") LOL A cyclist NEEDS to feel that wind in their hair and doesn't mind grease under their nails. LOL I like riding... but maybe 60 miles of riding tops and preferably no wind or ginormous hills LOL. Maybe I have a little ADD in me? I need to know I get to do something else after - maybe that's the allure of triathlons... you don't have to do one thing for very long, so you don't have to get bored. LOL