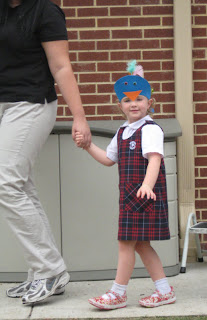 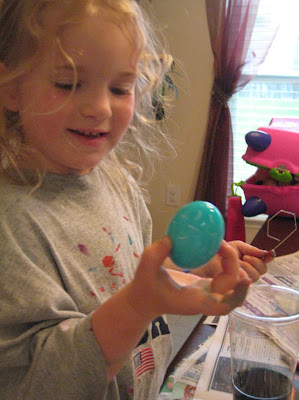 We had a really nice weekend, beginning on Thursday with Cass' "Spring Bonnet Parade" at school.

Friday night when we colored our Easter eggs. Cass had a great time... I think Daddy enjoyed it too!

Later, Saturday, Cass-a-frass and I waited 2 hours for a picture with the Easter Bunny for over 2 hours. I could not believe she was being soooo patient, but then again when

you want something bad enough... :) The pictures came out cute, but of course I have yet to scan them yet to share.

We came home and made some pom-pom animals. I found a craft idea in a magazine... of course no pictures of those either. *sigh* But I'll get them. :) 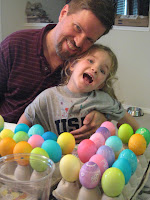 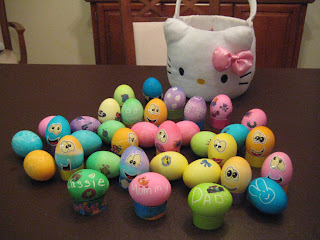 I went for a ride on Saturday morning with BAM! Holy Cannoli! The wind was quite the challenge for so early in the morning. We went through the Kemah area; I never knew Toddville Road was quite so long! It gave me some ideas for routes of my own from my house. :)

This week will be light with training. I will mostly swim, but I will do the Wednesday brick with the team. The MS150 is this weekend and there is so much to do this week, that I'm not sure exactly how much training I'll get in!

Speaking of the MS150. Thanks again to all my donors. You guys made it possible for me to ride. Some of you I don't even know, so I appreciate your thoughtfulness, generosity and belief in me! I've got my MS150 Checklist ready, I think. We have the expo on Friday, where I'll pickup my race packet -- hopefully they'll be some great swag. :)

Oh! Made a few awesome treats* this weekend - mostly NOT on the diet, but are delightful *treats* to be enjoyed once in a while.

Mini Crab Cakes - freakin' awesome - from Bon Appetite Magazine (NOTHING lowfat here) -- but there is room for inspiration to create a more healthy version, for sure.

Coffee-Chocolate Layer Cake with Mocha Marscapone Frosting -- freakin' awesome (also from Bon Appetite Magazine) and not heavy on the coffee taste; just enough to make you say, "is there something else in this?" I admit it... the icing on this cake was so danged good... it was hard not to taste-test. :P

Chicken Vegetable & Bean Soup -- This soup is so nutritionally valuable, it makes up for those few bites of cake enjoyed on the holiday. Very tasty! The link isn't working this morning, but maybe they're having issues. If you want to recipe and the link doesn't work, let me know; I will email it to you.

*Treats only to be enjoyed in moderationm of course!

I'm looking forward to having fun at the MS150. After that though, my training is going to be seriously focused. My next tri is mid-May -- I want to do better than the last one, for sure.