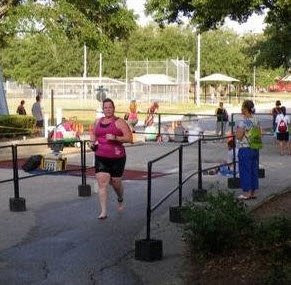 What movie is that title from?!?

So Jeff and Brede's Intergalactic Tri was in Katy, TX -- about an hour away from us. We had to get up super-early, which sucked, to get there.

It is no secret that my family is totally supportiveof my tri-ing. They are awesome! Still, though, to ask them to be at every event is a lot, so they typically pick and choose which they will go to. For some reason, Cassie really wanted to go to this one and Daddy sorta did too. So, they joined me, Elysha and Doug for the fun. :)

On Saturday Elysha and I picked up our race packets at Bike Sport in Houston. I was surprised, since I never heard of them before. But, evidently they bill themselves as the "original tri shop". Maybe so. I don't know. I will say that they were super helpful there! While I was there I was supposed to pickup a part for Darren so he could install a new crank on his bike and the guy offered to call him and talk with him; turned out he didn't need the part at all, just a little guidance!

I also got a recommendation for two different pieces of supplemental nutrition. One was called "Carb Boom!" It's all natural, nothing artificial, made from all fruit. I tried the strawberry kiwi, and it was pretty good. Didn't bother me, so that was a good thing! Definitely have to chase it with water! I also tried the Cliff Shot Blocks -- these didn't bother me either. Very smooth and chewy; had lick my gums over and over to get the blocks down the hatch! They are tasty, but I think the "Carb Boom!" is less work. LOL

Getting prepared for the tri's seems to be getting easier. I was a little cocky this time and didn't use my checklist, but I fared well. I didn't forget anything, so I get I'm getting the hang of it!

Love my lickity-split transition mat, by the way. LOVE IT. :) I really like the way it doesn't turn into a wrinkled mess by the time I hit T1 and T2! It's also neon pink, so I can spot it easily.

CONFESSION: I have to admit after our never-ending weekend of fun last weekend, coupled with a sh*tty week at work I didn't get in ANY training... talk about tapering, eh? Nothing. The last think I had done was a swim/bike brick on Saturday, a week before the tri. I was a little worried if the 5 days of nothing-ness would impact my fitness level. Maybe it did. Maybe it didn't... I wouldn't know since I'm not perfectly fit! LOL

Anyway, it was going to be whatever it was and I wasn't going to be able to change it, so I just did the best I could. :)

The swim was in a pool. There were just over 400 participants, so it took about 90 minutes for me to hit the water. I had seeded with a 7:30 time for my 300 meter, so I was number 320, towards the end. saw number 270 in the water, so I figured I ought to get in line... thank goodness I did. I kept looking for my slot and was getting closer and closer to the start. By the time I found 319, there were only a half-dozen people ahead of me! I briefly spoke to the person behind me, pre-apologizing to them if I slow them down and to let them know I would let them pass me. She seeded the same time as me.

My swim was really pretty good. I concentrated on form and efficiency, and of course breathing. The 25M pool felt so short compared to the 50 I'd been training in recently, so I think I will continue training there... it was definitely to my benefit! At the end of each lap Darren and Cassie were standing there as I turned around to go 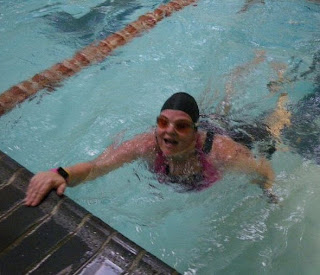 back, so that was kind of cool! Probably could have saved a few seconds by not stopping for a second to smile for the camera, but it's all good (and worth it) in the end. LOL

I did let 3 or 4 people pass me, as we all kind of hit the wall together. I didn't want to feel the pressure and lose control of my breathing... So I think if I pushed a little harder, I definitely could have finished in 7:30, as I seeded, but that's okay -- I still consider it a great swim for me technically so that's an improvement. I'm happy with 8:17 right now. I'll take it.

The swim-to-bike transition was a longer run (relative to others I've done). Not bad, just noticed it was longer. The pavement was not terribly bumpy, so it wasn't totally uncomfortable. Sunglasses on, helmet on, bike shoes on. Grab my bike and go... just like that. Pretty smooth for a 2:12 transition.

The bike was good too. I kept my cadence up above 90 the entire time and averaged 16+ mph. If I could keep that up over the longer rides, I could do the longer rides with the tri group and prepare for an oly distance one day... but that won't be for a while. This, while it may not be monumental speed for seasoned riders, is a great improvement for me. In April I was averaging more like 14 mph. The course was nice and flat. Had a little headwind, but not more than the tailwind made up for. Went through some country roads in Katy. Nice and open, the way I like it

My run transition actually didn't turn out to be that bad, I guess, though it felt like an eternity. I took off my helmet and glasses, put on my hat. I chose to take time for socks this time since I got a huge blister on my toe the last tri so I skipped the blancing act altogether and just sat down to put on my socks and kix. I put my sunglasses back on and SNAP! Busted them. Effin'A. I didn't realize my own strength. Oh well, grabbed my frozen ONE Coconut Water which was perfectly defrosted (and refreshing) by this time and headed to the run out.

My run, as usual, was shitty. Couldn't to the run 4 walk 1 I do during my practice runs. I could barely run 2 and walk 1. What is with that? If I can run 4 and walk 1 during a 5 mile practice run, shouldn't I be able to do this for 3.1 miles after the bike and swim? Do they take that much out of me? I don't get it. My pace during practice runs is 11+ to 12+ minute miles -- this 14 minute BS I'm pulling on race day blows. I tried to get to that place where I wasn't thinking about my breathing or my feet hitting the pavement or how hot it was. I tried to put my thoughts somewhere else, but that only wored momentarily. Wait a minute... 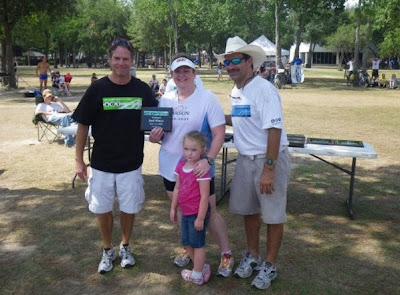 You know what? I'm sitting here pissing and moaning, but I think this is my best race-day pace! I just checked the official results and it calculates to 13:39 pace! Okay, I'm going to quit complaining. That is an improvement. I mean, it might not be the 11+ - 12+ pace I see on my practice runs, but I think it is my best race day pace. I'm going to have to research some and verify. *blinks eyes*

There's not much else to say about the run. The first mile was boring, the last 2 miles were nice, right through and around the park. The best was seeing Darren and Cassie at the finish. :)

Oh, incidentally, there were 5 Athenas entered. The first place Athena finished 20 minutes ahead of me, then the reamining 4 of us were more close. So at least I'm fastest of the slow!

Here's how it panned out:

Elysha kicked-butt too! She placed 5th in Athena and that's good for USAT points!


Things I did Right:
- Found some good supplemental Nutrition (Boom! and Shot Blox seem to be pouch-friendly)
- Relaxed more on the running and redirected thoughts (some).
- Had a really nice, controlled and efficient swim.

Things I Could Change:
- Not bring my favorite Tevas to the swim... Someone's got a nice pair of comfy sandals. *sniff*
- Continue to train/run in the heat. Don't dodge it; that doesn't make it better or easier.
- Not be SO nice and let the other swimmers pass me. Believe in myself enough to know I can stay ahead of them.
- Don't be cocky and use the checklist. I was okay this time, but someday I'll pay for it!
- Continue training in open water and the 50m pool.

The real question now is, do I go through with the Houston Half Marathon? I have 4 days to decide.

Off to research my results. LOL
Race Report