August 23, 2009
Well, there really isn't much about this race to report. I participated on an Olympic distance relay team, taking care of the bike leg. I will admit the week before I was sort of bummed I didn't sign up for the individual sprint.

This tri was in my "backyard". Our tri club was a huge presence at the event, so it was nice to have the other clubs to "our house", so to speak. It was cool. :) I love that our club has so many different kinds of athletes and all accepted, no matter your skill ability.

I got there early to help wherever I could -- Elysha joined in the volunteer fun too, so it was nice to have a personal cheerleader there! Getting there early meant I could pick where I wanted to rack (on my assigned rack anyway). So I found my number, racked, set-up and then went to go volunteer. That mainly meant policing transition and checking the athlete's bikes before they entered. I was surprised how many folks were missing their end caps! I mean, so much so, maybe it was a sign, or something. LOL

Anyway, about 30 minutes before the race start, I learned that the relay folks were supposed to rack on bikes outside of transition (???). To me that was strange. D, our runner, went to go find my bike and gear to bring them to the correct rack for me because we were super busy getting athlete's in. She comes back and tells me that my bike is not on the rack?

It's not like I have a desireable bike. I mean it is fine for me, but it's a 2003 Specilized road bike -- If was going to steal someone's bike, it would be a tri bike! LOL of any kind! LOL

So I left to go check for it. I'm not sure where D check, but thankfully my bike was where I left it. In her defense, it was a little crazy in transition -- people were just all wrapped up tight yesterday, it seemed. Relayers were frustrated becauase of the way their swimmers had to exit and we had to ensure they ran over the timing mat.. it was, I admit, pretty jacked up. Oh well... just some more of that race adversity stuff you have to deal with and move forward. 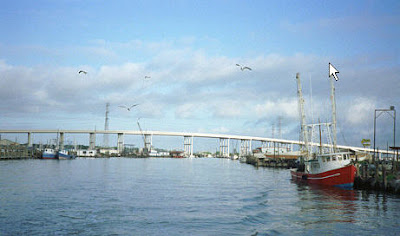 I have to admit, my bike was "okay", but not great. My average speed was 15.9 for the 24.6 miles, and that's decent for me. I could have drank a little more, and maybe a shot block or two. It was strange though; I just seemed to feel dips in my energy, but then I would feel good again. I sometimes wonder if my interval training, for running, impacts my performance on the bike. I run 3 minutes and walk 2. I'm told your body gets used to that 2 minute break -- I wonder if that carries over into the bike? The Kemah bridge is always a challenge. I really need to figure out how to prep and attack it properly. That's a picture of it above, but that's only half of it. It's just a long, steady climb, and if you don't know how to climb it, you crawl it at 7mph, like I do. :) And remember, the term "hill" is relative to our hills in the Galveston county part of Houston -- our hills are bridges and overpasses!

I didn't burn it up on the bike, but my goal was to finish at >16mph and have energy where I needed it most, because I knew I would need it at the end to overtake who I thought would be the 3rd place team and I did just that. :) I just kept that team's rider in my sight, and made sure I could at least finish ahead of her. In the end, that third place team came in 4th anyway. LOL Oh, well! Good times anyway.

Oh, and just for the record, there were only 2 Athena entries! LOL I could have placed on the olympic distance, no matter how pitiful I did! Funny, huh? Though it would have sucked if I couldn't make it through the swim! That's okay though -- I'm going to be ready for my Oly next April -- I'm actually getting excited. :)

Next Up: Du the Bear, a run/bike/run and Firethorne (a sprint)
Race Report