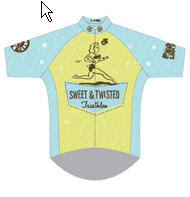 Wow!What a great event! It was run well, organized and challenging.

Admittedly, I was not looking forward to traveling for another tri, but did so because their bike jerseys were super cute and cheap too (relative to bike jersey prices). The fact that I'm twisted enough to even do a tri in Texas, in August, I think qualifies me as well. Thank goodness Elysha is as twisted as I am, because at the least I had someone to commiserate and celebrate with, because you know you do both during the sport of triathlon, because you hate the fact that you actually love this stuff. :)

We were also joined by Angel, a beginner triathlete (this was her second tri) -- and even with her challenges she hung in there. She was terribly short on sleep (by about 7 hours) and had not eaten anything. Virtually no sleep and lack of nutrition won't help any finish. Kudos to her for completing the swim and the 5k though! The bike was challenging enough, without having the added challenges -- So Angel, if you read this, don't beat yourself up. You could have easily just sat on your ass the rest of the race instead of doing the 5K -- so don't worry about it!

Right after we picked up our timing chips we were headed down to the swim start to check it out. I heard someone calling my name, but I knew Angel and Elysha were next to me. All of a sudden this girl comes up to me and it's one of my former co-workers, Melissa. She was there doing her first tri with a few friends. We helped them get setup and acquainted with how things work -- it is such a small world! 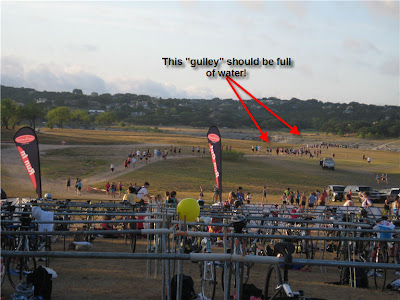 The tri was at Pace Bend Park on Lake Travis. Right now Lake Travis is about 30 feet low (click on the picture to see the full-size) -- only 20 ft from it's lowest point ever in 1951. The Red Licorice Sports folks were on the ball, testing the water quality of the lake and communicating results to the racers, so we knew it would be safe. It was obvious from their volunteers and staff they were not just supportive, but wanted everyone to be safe.

So, the swim. Holy cow! Now, I knew the lake was low, but you don't really get what they mean by "low" until you see it.

It was so low it made the transition from swim-to-bike that much longer! Navigating the dried-out, rocky, sandy bottom of the lake was a challenge. They let us bring our shoes to the swim exit to help us navigate the rocks hills and loose gravel. You can tell from the picture (above), 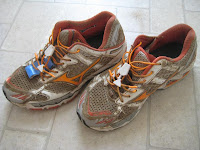 but as you pass that 1st arrow, there was a downhill drop that we had to trek up for the swim exit to T1. I didn't know what I should do footwear-wise. I think next time I need to bring a pair of crummy sneakers for the "dash" to T1. My running shoes now look like I went hiking on a rainy day in them! Thank goodness I'm needing a new pair!

Anyway, here's my Garmin data. I think I was SUI (swimming under the influence). From looking at the Garmin I obviously can't swim a straight line to save my life. Look at all that wasted energy! I wish I had worn it last week so I could have seen how badly I swam off course the 2 times I did. This is pretty funny to look at. That part of the course, that is the straight line going up? Nope. there's no water there, even though you see it on the satellite picture. Another showing of how low the water was... it was jut incredible. 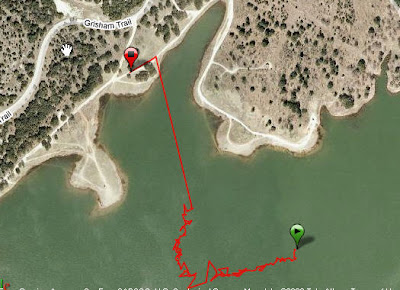 I had some issues with my Garmin, but they were totally user related. I got it working for the swim, but after that, who knows? I have to got to take time to figure this thing out! LOL I spent the first 5 minutes of the run trying to get my interval program started! For whatever reason it is so much easier for me to keep pace with the timer going. I have got to practice and get better with it.

In the end my official swim was 15:59 for the 500 m. that's better than my 16:30 the week before. I did keep in mind my swimming tips from the clinic again, but everything felt more natural. I spent more time in proper form, with my head in the water stroking, than I have in the past. I had some trouble breathing because of sinus issues and allergies, but I was fine. I just couldn't swim my normal 3 stroke pattern.

Dash to the transition was NOT a "dash" for me... I chose to navigate the rocks and sand carefully and slower to avoid a twisted ankle or some other injury that might put me out of my running training for the half-mar. I jogged into the transition when I got about 2/3's of the way there. Actual transition time was just 2:51, and considering I had wet, dirty feet to deal with, I'm not disappointed.

The bike. The course had good-sized rolling hills with a couple of doozies. It was a 2 loop course I had never ridden before. I had several incidents where I was in the wrong gear and that cost me lots of energy on my climbs, but the second loop was so much better since I knew what to expect. My legs were super tired from the swim and because you hit a steep climb right at the bike start, I didn't have time to spin my legs like I usually do. It took me a few miles to get my legs back, and even then I was still tired. The second loop was much, much better. I didn't have a great finish time on the bike, but then I'm never very good in the hills either because I don't train in them. That said, a piddly 12.2 mph pace got me though; really, I'm not complaining. :) I did have some moments of greatness where I shifted perfectly, and I love when that happens. I think my max downhill speed was 38.8 mph... that was wild fun! This is one of those courses that if you practice it, you'd definitely see big improvement each time and the more fun you can have navigating the downhill -- kind of like Danskin, but much a much prettier course.

I made it back from the bike and transitioned to the run in (very slow for me) 3:19. By now we had lost our cloud cover and it seemed like the heat just spiked. Of course it was a run, so I was having a hard time anyway, but by the time I got to mile 2 I had this wave come over me. I got tingling in my jaw and knew I was going to get sick (and did), if you know what I mean. I was so embarrassed. I never had that sort of thing happen to me before. I guess it's a reminder that I am still a beginner, but I like to think I was having so much fun it made me hurl... so we'll leave it at that :) Anyway, the volunteers rocked. They packed my top with iced, cold sponges and filled my bottle with Ice for me. They made sure I was okay to go on. In a few minutes I was on my way. I walked, more than ran the last mile, but jogged it in over the line. I should have taken the cue from my heart rate monitor though; when it wouldn't drop during the walk part of my interval, I should have known something wasn't right. My run time was 51:50 (oh well). I can't wait until the cooler weather and better run times... I look forward to it!

What really rocked is, they had towels, water, water bottles, medals AND cupcakes left, even for us slower finishing folks. The finishers medals were very cool. Red and White enameled dog tags with the event logo on them and year -- Loved them!

What I did well:
- Swimming. I keep getting better!
- Head game was good this time. Could have easily let the unexpected bike course bother me, as well as getting sick on the run, but I kept positive and focused on how lucky I am to be able to do these things.

What to remember for next time:
- Practice with my Garmin; I might have gained time on my run if I hadn't been futzing with it so much.
- Crummy sneaks for the "dash" to T1
- Extra water bottle in transition to rinse off feet
- Ride the hills; if I want to get better at them.
- That sometimes you're not always there to "win" or have YOUR best show. I'm glad I was there to support Angel and help Melissa and her friends with their first tri!
- Listen to your body -- if your heart rate doesn't come down while you're walking, there's a reason for it!

Turns out Melissa and her friends had a blast too and they're already planning on doing another! So good for them! I think Melissa finished 02:22. Not bad for a first triathlete!

Note to self: The next time the race organizers decide to give a separate time for, and name, the transition from swim-to-bike, you gotta know that's a challenge all of it's own! :)
Race Report