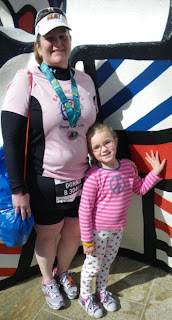 Frist, the race experience was great! I loved the supporters, the volunteers, the bands! The race for me was okay, though I am proud of the accomplishment in it of itself. Last year at this time I couldn't even run a 5k -- in fact I had only started to REALLY try to run for the first time... ever.

Everything that morning went according to my race plan. All things encountered were well within my control, so that was a plus. I hooked up with Cathy and headed over to the BAF tent for warm-up and club pictures. Nothing out of the norm. I was super excited to get things going.

Cathy asked if she could run with me. She runs much faster than me... in fact, she just finished her first Ironman in Panama City. When she asked me, I was surprised, but welcomed the experience and the company. Incidentally she was also with me the first time I had to run 10 miles. :)

We were corralled (and warm) while waiting packed like sardines with everyone else. I guess it was at that time I really understood that this was a world-class event and the largest I have ever done. More than 20,000 people from all over the world!

So... at 7:12 BOOM! the cannon went off for my wave. It was crowded and you really could not do much in the way of running, but of course there were those who were. My only goal was not to blow it all in the beginning. That said, the fact that the run starts on an uphill overpass certainly helps one control pace! The first couple miles were uneventful, and slower than my desired half-mar tempo pace, because of the crowd. The faster runners shared their annoyance at the slower runners and walkers... which kind ticked me off. If they didn't want to have obstacles, why not get there on time and in your proper wave? Gees! I did my part ettiquette wise to keep right, but somehow you still piss someone off who thinks you don't have a right to be there unless you run an 8 minute mile or better.

The first thing I recall was how neighborhoods of people were outside supporting us... folks you would not think would bother or waste time watching people run by their house. They were cheering, calling our names, jokingly offering coffee and donuts and playing music nice and loud to pump us up. They were having so much fun and it added to the excitement.

After a couple miles in I was concerned that my legs felt heavy (they had right from the Start). Cathy encouraged me and said maybe I needed more distance to warmup. I just tried to stay positive and ignored all the time clocks and volunteers calling out pace times. Endurance-wise I was doing excellent. Heart-rate was a good race day effort. I felt good -- it was my legs that just didn't feel right. I did some hill training earlier in the season, but looking back, I'm not sure it was enough... clearly there were more uphills than I remembered anyone mentioning, but my plan was to not kill myself on the uphill, but to make it up on the downhill. Which was working... by the 10K mark my goals were still in site, though my stretch goal would have been super-stretch for sure. I was okay with my stretch goal passing me. I just kept focused and steady.

I was doing okay until about mile 8. Around then my right glute started to tighten up on me and I had to keep stretching it. This never ever happened to me before in any training run. By mile 10 the pain was literally stabbing. At this point I switched to a 5/1 and was hanging in there, barely making the run 5 before I would tighten up again. I realized I missed my stretch goal (which was okay because it was a stretch!), but I did feel some disappointment because my realistic goal of sub 3 hours, which was sooo close, might be escaping me too.

I didn't want to be self-defeating, so at that moment I made it a point to get it together, but the pain was bad; once I hit Rusk I just kept focusing on doing the best I could and finish as strong as I could. I really didn't hear or see anyone until I crossed the Finish. I did hear Cathy trying to tell me to, "Look at all the people!" to keep me from thinking about the pain, but I was already stuck in my own head. In fact, one of my tri coaches, Melanie ran right up on us and it wasn't until she was in my face that I really saw her -- I just kept running! I could see the corner of the GRB sticking out! I finished 3:02 (Just 2 minutes shy of my goal!) 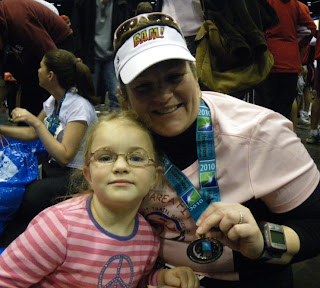 I don't want to sound like I am giving an acceptance speech, but I was so appreciative to Cathy for running me! She was with me the first time I ran 10 miles and this time she was with me when I ran my first half marathon. She could have run her own race, a faster race, or with someone else who might have been more entertaining... but she stuck with me anyway! And though I may have been kinda quiet, trying focus on what I needed to do, she was there encouraging me nonetheless! That, to me, is what is so awesome about my tri club and running club -- I love the way more experienced athletes share their experience and give-back to less experienced athletes. There is so much to learn from all of them! And yeah... I'll do it again.... who knows.... maybe even the full!

This is footage from the Finish Cam.  First they call Cathy's name, then mine.  They also mention our running group, "Bay Area Fit"  :)