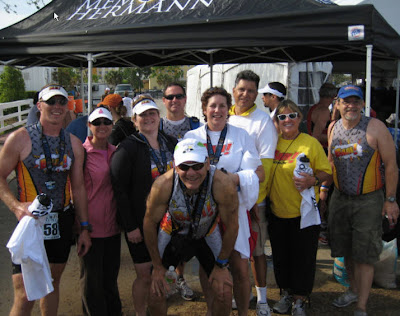 I'm a bit late with my race report for Gateway to the Bay.  Having done the bike leg on a relay team, there really wasn't much for me to actually report.  There are some lessons to be learned from the day, so it gives me reason to share them here.

I pretty much spent the weekend volunteering at the event.  Many of our club's members were doing the sprint distance on Saturday and the Olympic on Sunday, so it was nice to be a part of it and see them through their experience.  I worked at packet pick-up on Friday afternoon and Saturday early-morning and it was nice to see everyone so excited about this inaugural event -- I really enjoyed helping out and being a part of everything.

Saturday morning I got to watch the swim start.  The water looked pretty scary to me, but and reports differ depending on who you talk to.  Some say it was not as bad as it appeared, while others felt like they "cheated death by finishing."  The sprint distance had to go out and back; against and with the waves. The Oly distance athletes were brought out to water on boats and swam back to shore from 1 mile out.  As I stood there watching I could see the change in the water.  After the first 3 waves went the water began white-capping.  Later that day we had some rain, so there was definitely some nasty brewing.

It appeared that the Saturday event was successful.  I heard that they brought 6 or 7 swimmers back in, who didn't make it, and one cyclist was hit by a non-observant driver.  The cyclist must have been okay because he denied medical assitance.

My race was on Sunday, the Olympic distance.  I completed the bike leg on a relay team.  For whatever reason, I decided NOT to use a checklist.  This is so not me.  I use a checklist for every race, whether or not I have it memorized is not relevant.  I need to know it's crossed off -- done!

I prepped everything the night before and planned on getting to transition timely.  Had my raceday oatmeal for b'fast... I knew where I was going and where I was parking; all was good.  It was open racking in relay corral and I was the first relayer there.  I picked the spot closest to the bike out and next to the pros that were racing (Matty Reed and Andy Potts).  Ironically enough, while I was told how personable each of them were, I didn't go up to them at all.  I guess I was kinda star-struck.  I couldn't even think of anything to say that wouldn't sound so trite.  I simply observed from afar.  Man, both those dudes are a tall drink of water though; I'll leave it at that!

I racked up and realized I had left my aerobottle at home.  Sh*t!  So the question was, do I just use my regular water bottles on the back of my seat?  I'm not comfortable reaching for them while in an aero position, so I knew I wouldn't hydrate enough.  After mulling it over, opted to run back to my car, get my wallet and hit the expo to purchase a new PD Aero bottle.  They didn't have the Aerodrink bottle, but they did have the PD Aqualite bottle which was supposed to work with my bracket.  It was just a few ounces smaller, but I figured I could get the difference in right before starting the bike.  I got my wallet, headed to the expo and dropped $25 on the bottle.  I attached the bottle, filled it and felt good about my choice.

We were in the corral waiting for the first swimmers to come out.  Naturally, as you would expect, the first one out was the pro, Andy Potts.  My coach actually followed him out of the water by about 3 mintues (he was on a relay team too!).  The excitement was brewing.  Slowly athletes were coming into transition and I began to see some familiar faces and chatted with those who were relaying that just had their swim experience.

I was going back and forth from my equipment getting ready slowly.  I had my shoes on... chatted a bit... put my helmet on... chatted some more.  I fully expected  to have more time.  Suddenly, out of the corner of my eye, I saw my teammate running to the corral after just having finished his swim!  Woah!!  I was not ready.  nice, loud, "Oh, crap!" A sprint back to my bike was in order.  I buckled up the helmet, loaded the sunglasses, tossed my jacket and carried my bike out of transition.

Kemah bridge.,.. half of it!  Climbed it 4 times!
My bike mount/start was smooth.  I took my time to avoid any mishaps.  My first climb (4 climbs total!) up the bridge was tough... with no approach, you're climbing the from the moment you turn on 146.  The steepest part is the actual bridge though.  My paln was to go up slow and steady (and I really had the s-l-o-w part nailed) and "big ring" it on the way down, passing everyone who burned up their energy trying to go up fast.  Going North over the bridge this really wasn't doable option since we had to make a hard right before the bottom to go under the bridgeto turnaround to take the southbound bridge climb.  I was looking forward to the Southbound climb though, knowing I could let loose on the downhill through the 146 straightaway.

Well, things didn't go quite that smoothly.  After all, this is me racing.  Something always seems to go unplanned.

On the first climb I came down the north side of the bridge and safely made the hard right turn, but noticed my new aerobottle was not secure.  This was very curious because when I attached it I really shook and pulled on it to ensure it was secure.  I decided to stop and take the time to fix it right, even if it cost me.  I was afraid I would be unsafe trying to fix it while on the bike.  I pulled-over, dismounted and took the time.  I even felt good about my choice, knowing that the alternative would have been a more risky gamble. 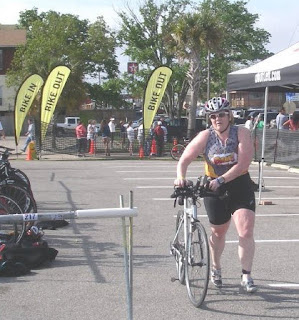 With that I was on my way.  I made the turnaround and started climbing.  "No way?!"  my bottle came loose again.  I was quite ready to toss it, but didn't want to get penalized for abandonment of equipment.  With my luck, the motorcycle official would surely spot me and note it.  I tried to relax and think.  I knew I would need my hydration to have the best ride possible, but I did a decent job hydrating the preceeding days.  By now the bottle was so loose I had to hold it between my wrists and was forced to climb in an aero position -- not the most optimum.  All this and I was only a couple miles in!  I took the southbound down hill (not as fast as I would have liked for fear I'd loose the bottle) and at the turnround around mile 9 or 10 I tossed the bottle of to a volunteer and let them know it was broken and continued riding.

The rest of the ride was good, except the fact I had no hydration.  LOL  My goal was to finish under 1:30.  I felt like I was on track.  I wanted to average 17 or better.  In the last 2 miles I knew I was going to get my goal. I was psyched!  I pulled into transition and my computer told me 1:27:09.   We swaped chips and our runner was off. 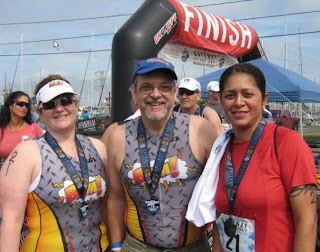 As it turns out our Relay team came in last place.  No big deal to us, as many of the relay teams were totally stacked!  We were not stacked at all.  In fact our runner was brand new and never competed in a race before!  She did great though on her 10K.

When the results were posted I was bummed.  My official time was 1:30:01.  I had forgotten my computer stops when I stop.  So when I stopped to fix my bottle, my time stopped too.  I took more than 3 minutes to try to fix it and it broke again anyway!

Things I did well: