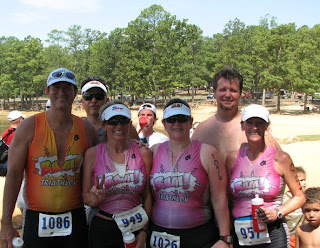 First, I have to say that this race may not been my fastest times ever, but it was a day of challenges and in spite of them I didn't let it phase me and just overcame and remained positive. That was huge. :)

First, my aerobar pad was loose; almost lost it. On Saturday after packet pickup I got some industrial strength velcro to fix it. Unfortunately by the time I actually made it to the race it had come off during the drive! Thanks to Scooter's Bike Shop, they actually had pads for my bars!!! $20 and a friendly one-on-one chit-chat with Dave Scott as he was having his pedals changed, and I was on my way. Can I just say he is so cool and very down-to-earth! I told him how never having swam before, that I learned to swim from his You Tube videos. He thought that was awesome!!! (Of course I didn't tell this 6 time Ironman Lengend-in-his-own-Time that at that time I didn't know who he was.) *wink*

My wave start time was 8:33 and I was supposed to eat my b'fast 2 hours before. Well, it was a little challenging since we were already at the race, checking in, setting up, hustle and bustle. Again I didn't get all the volume in. I got 1.5 power bars, a small banana and 2 granola bars (I didn't get the strawberries and accidentally brought my G2 to drink pre-race, instead of G'ade Endurance -- crap!). Anyway I got in what I could. My Sports Nutritionist is trying to come up with a smoothie type option that will allow me to get what I need since I can't do volume.

Swim 23:36 (800 "the course was long")
I did go for a warm-up swim, 15 minutes, and when I came out I was pretty nervous. The Athena wave was launched with an age group wave. I've never been in a wave of nearly 100 people! I decided I was going to be aggressive and "claim my space" and I even found people to draft off of along the way! I started right in front. Wow! When that cannon went off it insane with everyone knocking each other around. It was exciting, but definitely the most active wave start I've ever been a part of. I held on through it and felt like I was swimming well after the chaos passed. I was smooth and steady and didn't break my pace. It also seemed I was still among a lot of other pink caps and even passing some -- which is unusual for me! Typically I am separated from the crowd pretty quickly. I had trouble finding something on land to spot consistently, so I was spotting the buoy -- bad move. At some point I started spotting the wrong buoy. I looked up to spot and if I had taken another stroke, I would have hit the boat -- it was right there in my face. I went so far off course the kayaker had to come get me back on course. Of course that cost me some time, but I didn't let it bother me and though it was pretty funny! By the 2nd third, the the water was feeling stoopid warm! I'm not sure I've swam in anything so warm before. I started wondering, if not worrying, that drinking the G2, instead of the G Endurance was going to cost me. I let it go because there was nothing I could do about it while I was swimming; I remembered I had brought an extra bottle of hydration on the bike and figured if I needed something, I would have it. I kept positive and took the 2nd third I took a little easier, and then the last third I wanted to finish strong. I know going off course cost me some time, but I really experienced some great stretches where I could just feel myself moving through the water efficiently. My "moments of greatness" are slowing turning into "stretches of greatness" and I can tell my effort is paying off -- and that makes me really happy.

I was more unsteady than usual getting out of the water. Wobbly on the uphill, sandy swim-out and didn't really run it. I know it made for a longer 3+ minute transition. :(

Bike 1:03 (18.2 miles)
I'd say that the course was rolling hills, but there were BIG rollers, smaller rollers and some double-rollers. I will also say it was FUN! It was not like anything we train on in Houston; it was much like the bike course around Decker lake in Austin.  A triathlete friend had said "nothing traumatic" with regard to the hills, but there were two real challenges for me that I can recall where I was climbing at less than 10mph. The first 15 minutes on the bike sucked. I mean, really sucked. I felt tired and my legs felt horrible. It took so much mental tenacity for me to not accept that's how the entire ride was going to be. I couldn't get up over 14/15 mph when I first started and there weren't any hills yet! I just kept telling myself it would get better and not give-in because I knew I had more in me. After 15 minutes I started to feel my legs again and felt stronger. Later I would have some really good stretches on the bike where I was able to climb at 18/19 mph, but then others where I found myself in the wrong gear and you know how that goes. I think I hit a downhill max of 33 mph and that was great fun! I did pick it up in the last 15 minutes of the bike like my coach and I talked about.  I slightly altered my nutrition on the bike, starting with the G'ade endurance since I didn't get it before the swim and thought maybe that's why I felt so cruddy. Doing so pushed everything in the rotation though, so I didn't do my first get until 30 minutes into the ride. Also I couldn't get my nutrition timer working (I should have double-checked it and didn't! Lesson learned). Anyway, I did a gel at 30 minutes in and one in the last few minutes of my ride, and since I can't do gel w/G'ade I was a little short on my G'ade intake.

Bike to run transition was a giant horseshoe, and I was on the complete opposite end. It felt like it would never end. It was another 3+ minute transition.

Run 45:55 (3.2 miles)
My legs pretty much felt like they should after getting off the bike: a little more tired than usual. I knew I just had to keep pushing through. I really wanted to run mile-to-mile, but in the first mile I took a couple of 15 second walk breaks -- nothing too long. I'd say within 10 minutes of running I was feeling better. I carried G'ade Endurance with a Nuun in it since I knew there was water on the course and I had a gel, which I'd knew I'd need 30 minutes into the run. The run was mostly shaded with cross country paths. I made it to the first aid station and just kept thinking "1 mile repeats". My first mile was just over a 15 min pace, I made it to mile 2 with just a couple super short breaks in just over 14. On mile 3 I really wanted to get in under 13 and thought I could. I hit the cross country portions of the run and slowed down a bit. At about the time I needed a gel there was a larger uphill walked up to get my gel in. I forgot I had only g'ade with me and the next aide station was 1/4 mile away. The gel was stuck in my esophagus. I didn't know whether a small swig of the G'ade, just to get it down, would have bad effects. I really got uncomfortable and had just took the gamble and drank a small sip. It was enough to get it down. I made it to the next aide station and took in some water. I still had it in my mind that I wanted to come in under 14 for mile 3 and just kept going for it. Mile 3 wound up still being faster than mile 1 -- I look at it as a victory because I didn't get continually get slower. I wanted to come in in 45 minutes but missed the 3.2 miles by 55 seconds! I'm really not unhappy with that at all. I worked hard for it and learned a couple more things.

Dave Scott, at the dinner the night before, commented on how generally triathletes want to be perfectionists. For him, he said it was always an all-or-nothing scenario. As if when he couldn't train the way he wanted or as much as he wanted, he just wouldn't train because it wouldn't be perfect. We forget that triathlon is as much about being competitive as it is about healthy, physically and mentally. What I took away from his comments was I have to remember that even though I'm surrounded by athletes who are fierce competitors, that's not who I am. I'm one who's happy I can be out there at all. Do I want to get better? Sure! But I can't let the fact that progress is slow bring me down because it takes me out of the moment and I miss out on the experience. My coaches all say "triathlon is mental" all the time and I hear them, every time they say it, but it really sank in this weekend.
Race Report