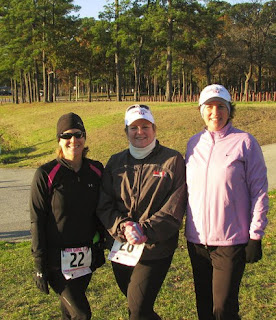 Yesterday was RunGirl 13.1. It was an inaugural event and the only all-women's half marathon in Texas.  It is a TriGirl Sports event, so it's always a well-run race.

I was really thankful I was feeling better than I had been.  I'm still pretty much zonking out the moment I hit the couch in the evening, but the allergies/congestion/sinus crud I'd been dealing with is so much better.

I did something different on this race day.  After I woke up I got dressed and went outside for a quick 1 mile around the block.  The weather was cold, in the 30's and I was supposed to make sure my attire would be comfortable and just loosen my legs up a little.  I chose layers, in case the sun made it warmer and it paid off.  As I walked to the start line I wound up shedding my jacket and wore just a long sleeved tech tee and my new favorite, New Balance Control Capris.

That's Debbie, me and Cathy (from left-to-right), just before the race's start on a chilly and blustery morning.  The course started right on the water where it was colder, but once you were on the course it was a little warmer.

My run was going really well. I did 1/2 mile intervals with :30 walk breaks.  The plan was at mile 10 to stretch it to 3/4 mile intervals.  By the time mile 10 came around I was having some pain in either my hip flexor or groin.  I'll find out today. Last year I fell and pulled my groin.  I thought I recovered from it.  On Saturday, the day before this race, I slipped in a puddle of water by a drinking fountain.  I caught myself before hitting the floor, but only after doing an incredibly executed, extra-elongated lunge.  It's quite possible I angered the injury again and the fatigue from running was pissing it off more.

The course is full of little rolling hills. Most of them you don't really feel right off, until you hit one of the larger climbs and you think, "Oh yeah... I was climbing (gradually) back there... that's why this one is a  challenge!  there was really only 1 very short, but steep climb that was "challenging"


Anyway, by mile 10 I knew I still had a shot to make it under 3 hours, so I wasn't giving up.  I pushed through as hard as I could.  The harder I pushed the more my injury started to flare up.  I was working really hard to not let it get to my head, and I think I did a good job.

Despite my challenges, this was a 2+ minute improvement over my Aramco Half Marathon in January (my first half).  At that race I was only running 1/4 mile intervals and taking 1:00 walk breaks.  So there's definitely improvement, and that's all that matters to me. :) 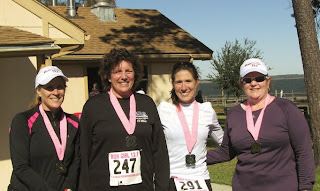 I didn't stay much for the post-race festivities. I was hurting way too bad.  I basically finished, took a picture then left.  I could just feel my hip/groin stiffening up on me.  I had Hubs roll it for me (it's a hard spot to get on my own) and iced it last night.  It feels better this morning, but it's still sore... but then again my entire body is sore today!  That's Debbie, Cathy, Heidi and me.

The medals were "cute".  You can't tell from the picture, but they're shaped like a flower.  In the middle hangs a smaller flower; it's a charm you can put on a necklace.