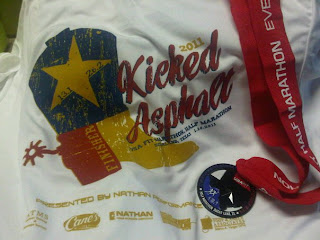 I was getting super-excited about this race. Strange because, first, it's running. I only see it as a necessary evil to Triathlon, and second it's a running race. Bleh!  Nonetheless, I was excited to see what would happen since the last few weeks I felt like I was improving. A PR is always great, but a PR in spite of obstacles and mental game, is even better.

Everything started going whacky on Friday night. I went to packet pick-up and a car backed into me while I was walking through the parking lot. I saw the guy leaving the ATM and getting into his Bentley (yeah, I was at Luke's Locker) and I thought, surely he won't just get in and back-out. He did. He saw me a the last second and stopped. He hit my legs, but didn't knock me over. It was more scary than anything!

Then I get home and I'm getting stuff together to go volunteer for the Surfside Shuffle (to earn some good Karma!). I was coming down the stairs in my house and, in socked feet, fell down half a flight of stairs. My back and shoulders are pretty jacked up; by yesterday afternoon I couldn't even move a gallon of milk from the counter to the fridge. I checked the weather for Sunday and saw 100% chance of rain. Cr@p! Now it wasn't a question of "If?" but, "When?" it would rain.

It was like everything was just going against having at least decent conditions for a PR and it wasn't good for my head. I took some ibuprofen and hit the sack by 8:30 and prayed the rain would pass and promised Mother Nature if the rain was gone by morning, I'd never shift another Tuesday Track workout, ever!

I got up at 4am and still the rain fell. I quite reluctantly got my gear and headed out. The closer I got to Sugar Land the more rain. Rain, wind, rain and more wind. I never race with an iPod, but my head was in such a bad place, I brought it with me thinking it might help me get out of this funk. None of this BS was in my race-viz.

Made it to the race and headed out to the start; did I say it was raining and windy? I squatted in an alcoved entrance to the university with 9 others in an effort to stay out of the wind and rain. We heard the first announcement.. 10 minute delayed start, then 15, the 45. At 45 I headed back to my car. I made a friend in the alcove who didn't have a car, so I brought her with me. I sat in the car and warmed up for 30 minutes, it was worth it.

We headed back out to the start and I headed towards the back-of-the-pack. I decided to use my iPod since my general attitude was still pretty crappy. I hoped some good tunes would come on and help my motivation. It worked. It was like the first 20 songs in my shuffle were the perfect motivating mix. My first 5k, 5 miles and 10K were awesome! Every time I passed someone calling out pace I was generally maintaining or getting faster through the first 8 miles. I was a little unsure of how I was actually doing when this very tall, probably 70-something year old, guy was walking as fast as I run. He must have been walking Half Ironman pace :) He asked me what my pace was and I told him. He said, "you're doing great!" I looked at the time and realized I was still doing good. I just pr'd my 10K time too! I had a little trouble keeping speed up through mile 8-10 but I was still passing people steadily, but I took in a small piece of banana and started feeling better.

My last 5K was supposed to be "something special" and I was supposed to race it. By this time my back and shoulders were killing me. My glute was causing me grief too. After I took note of the time, I knew if I could just keep my pace steady (which was getting more difficult) I would make my PR. I decided to push my heart rate just a little more and go back to 1/2 mile intervals with a walk just long enough to keep my HR from getting out of control, less than :30. I really wanted to race it more straight, but I didn't want to be stupid since I was hurting pretty badly. Thank goodness a Fort Bend Fitter who goes by "Taco Man" (as stated on his shirt) was in front of me. His nickname gave me a chuckle, and I was determined to stay on his heels. He was doing some kind of run/walk thing too, and we were leap frogging on another. He also reminded me of Cathy M., this guy seemingly knew everyone on the course. LOL He's chatting and shaking hands like he was the mayor of Sugar Land.

I made the last turn into the Finish and tried to race Taco Man to the end. Unfortunately for me, Taco Man still had some salsa left in his pot and I couldn't catch him, but I still, I achieved my goal, in spite of all the obstacles.
13.1 Cross the FINISH Race Report Running