June 27, 2011
I am, by no means, full of myself, but I know when I feel good on race day. Last year I spent so much time being tired from training, not knowing I was Anemic, so darn near every race I felt like crud -- it really did take some of the fun out of it for me.

Last year, this race in particular, was just a killer for me.  I cried a lot at this race, missing my dear friend Elysha.  It was a good day last year in that I was able to help her son and his friends do the race, but outside of that it was such a bad performing and sad day for me.

This year, another one of Elysha's friends decided to do the race, so it was again a chance to remember Elysha and smile. I met up with M to give her tips on transition, and I was so happy she was doing the race.  M had told Elysha she would do a tri with her one day.  Who knew Elysha would be gone so soon?  Life is too short.  Anyway, when M crossed the line, one of the last finishers, my eyes just filled with tears.  I still miss her so much.  :(

So, on with the race report.  Have yet to get our splits for the race, so I have no idea what my times were. The splits I have listed are off my Garmin, which are not completely accurate because it relies on me remembering to press the start button (Ugh!)  I started it late in all cases, but these numbers are close enough for horseshoes and hand grenades.

Got up, had my coffee. Got in 20 minutes on the trainer (not 30 as assigned). I didn't get do the recommended hot shower either, but I was fairly certain my GI issues were done, and I didn't want to wake the family up. :)

Brought breakfast with me: A mini whole wheat bagel w/almond butter, small banana and a Hammer nutrition bar for pre race breakfast (2 hours before start). Drank 16 oz. of G2 and 16 oz. of water. Ate breakfast at 6am (1.5-2 hrs before swim start.)

Got to transition setup. I felt really good. I had plenty of time, so I did swim an 300 easy in the pool to warm up. Drank some more water and hit the potty for one last time.

Swim: Swim started fast and fine... didn't seem like as long of a wait as normal. No one passed me, so that was good :)  The guy behind me tagged my feet just once and I gave him the opportunity to pass me at the wall, he declined -- I felt good. On the last half length it was a line of people walking! So frustrating.  Did what I could, there was no getting around them. This is the reason I generally hate pool swims.  I do think my swim went well. We'll see.

T1: I think it was pretty fast. Uneventful. In and out.

Bike: Forgot to turn the Garmin on, so the first few minutes on the bike was getting that going, but once I left the park I enjoyed the cross-ish tailwind and tried to keep my heart rate 160-165, which I was doing solidly and still feeling good. At the main turnaround we had some cross headwinds so that slowed me down a little, but I still kept the HR 160-165 and 19-23 mph! At 7.5 miles in I went to downshift, after turning directly into the wind, and the shift lever just came apart in my hand. Crud. 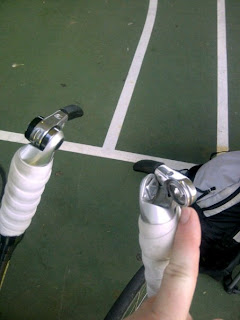 Anyway I pulled over to try to collect the pieces that had dropped on the road, but I couldn't find them. As you might imagine I was pretty frustrated. I was having a great ride, and I knew it!  The v'teer was going to call someone to help me and I almost gave in and said, "Sure.", but I still didn't know if my bike was rideable. I got back on and attempted to ride. When the lever broke it threw the chain to the smallest ring in the back and I was still on the big ring in the front. I figured it would be tough, but at lest I could make it work for the last few miles.  I also didn't think it would be worth the risk of shifting the front, something else breaking, then finding myself walking my bike back to a DNF.  Anyway, I made it back.  Whew!  Wow!  According to the Garmin I stopped for almost 2 minutes for my bike issue.  I could have shaved 5 minutes off my time from last year, but I'll have to settle for 3.  :)

Run:  Left on the run and I knew I went hard on the bike on that last few miles, so I tried to stay positive. After a half mile I had to take a quick walk, "Ugh! Already?" I just kept it together and kept moving realizing the whole run was ahead of me. Head up, open chest, hips under me. HR was between 155 and 165. I took a few more quick < 30 second walk breaks as needed.  It seemed like in no time, I heard someone say the finish was a just a 1/2 mile away... then I was done. :)  It appears I picked up approximately 2 mins pace per mile from last year.  Maybe all this stupid running is paying off. :)

Post race:  I felt spent when I crossed the Finish.  My quads were burning -- pretty certain I just tore them  up on the bike.  Sprints are supposed to hurt, so it's all good.   Outside of the malfunction, I don't think I could have put forth any better effort at swimming, biking and running.  Clearly  I need to pay more attention to technical things, like my Garmin. :)

Overall I like the race for a number of reasons, but truthfully, I hate pool swim triathlons.  They're crowded and you are somewhat limited on the swim  by the people in front of you... unless you're good at being aggressive and navigating. I do this race because Elysha loved this one (of course she did; it was a pool swim!).  I love that it's so close to home and this year we had a ton of BAMmers show up, so that always makes for a good time.

After the race I took a shot at one of my club mates, Sarah (a fellow club-mate and Athena athlete), who I knew would understand my jabbing as somewhat serious as well.  Make no mistake, I clearly see her point too.  When athletes choose to race Athena or Clyde, they're supposed to get an "A" or "C" on the back of their clave, instead of their age.  They are competing in a weight class rather than an age group.  They make this choice when they register for the race.  Generally volunteers are body marking and they either don't know about weight class competition, or are never instructed by the RD to inquire.  The premise is, that if you are racing weight class, you want to be able to see the others racing weight class... just as the age groupers can identify others in their age group to compete against.

Evidently I was the only Athena stupid enough to mark their calve.  :P 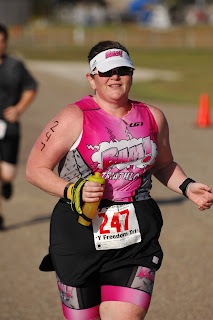 Now, I'm not a top competitor, so it's not like anything was taken from me, but I do feel like I deserve to know who I'm racing against.  It was clear to me during the awards why several of the women were working to pass me... it was because they were Athena and I was marked. (If they only knew how bad my run was they wouldn't have had to work so hard!) I was suspect because of their size (which I realize isn't always an indicator) but all of them, only had race ages on their calves.  I thought surely they wouldn't do that?

I think it should be the athlete's responsibility to let the body marker know.  After all, the athlete knows what they registered for, age group or weight class, and further, if they don't have themselves marked appropriately and place, they should be penalized, just like they were breaking any other rule.

So what of it?

If you are racing Athena or Clyde, what's your take on having appropriate calve markings?
General Bitchin' Race Report Small Victories Sprint Distance