The Race I Didn't Wanna Do -- Race Report for Galveston 5150

Even though, for the first time, she did. not. want to.

I signed up for the 5150 race because Hubs was going to do the sprint and we thought it would be "fun" to both race the same day.  Plus, I thought finishing up the race season with some events in cooler weather would be a nice change from kicking my own ass all Summer long in the heat.  The cooler weather might have given me a peak at gains I made despite feeling like crapola.

Since the moment I crossed that Finish line at Redman, training has been inconsistent at best.  Work has been super busy and when I start missing workouts, even just for fitness, I start to lose motivation.  It's a terrible cycle.  I know it's even worse when I have a race looming and I have no desire to train when I do have a slice of time.

The day before the race was a complete mom-a-thon.  We did a family breakfast, and hit the school district's Imagination Celebration where Cass-a-frass' artwork was being displayed for the 2nd year in a row (my little creative genius!  I can say that, I'm her Mom!).  I was thankful she changed her mind and wanted to stay at the celebration, otherwise I was looking at driving 90 minutes to Brookshire to visit the happiest Halloween place in the Houston area, Dewberry farm.  I really wasn't up to it, but what do you tell your kid when she says, "...but Mom, I used 6 of my 7 birthday wishes to get the biggest pumpkin at Dewberry farm!"

You say, "Okay, we'll go."...  because you're trying to make up for all those times you were training for your "A" race and weren't available.

Despite being completely ready to head over there, my faith was reaffirmed when she said she didn't want to go.  Yyyyes!

Race morning comes and I just don't feel like racing.  I'm almost resentful that I'm up and out and Hubs is home sleeping.  He got busy with work too and it totally ate his extra time, so he couldn't train at all -- He had to make the tough choice not to race.

I get to transition and setup my stuff, eat my b'fast and chit-chat with some of the neighboring Athenas.   I had checked the roster and there were 15 Athenas overall, and I think 6 of them in the Masters group with me.  Saw some club folks volunteering and some spectating friends.  At least I kept busy and tried to keep negative thoughts out of the way.

Everything was annoying me.  My bike, the fact that the weather foretasted wasn't what we were experiencing.  I was just a super-grump-face.  I hate when I get that way.  I took a chuck of pavement and laid down to try to get my head together.

At the swim start some club friends and I were hanging out waiting for the wave starts.  Out of the corner of my eye I see what looks like a firework.  We all turn to each other and say, "Did you see that?"  Turns out it was a big shooting star (we think).  Immediately someone pointed out it was good luck, so I hoped for a decent race, quietly to myself.

I got in the water and didn't really make my way to the front like I had been in other races.  It was a "active" start.  Sometimes I think it was better when I was a back-of-the-packer; I swam alone a lot and it's nice and peaceful there!  LOL Now being at least an average swimmer, I have people around all the time.  On the first stretch I got hit in in the nose pretty darned good and even swam over by some of the super-fast guys in the wave behind us on the 2nd stretch.  I guess at that point something clicked and I snapped into it.  I thought if I'm going to have to race I'd better make the best of it, right?  Right.  I came out of the water at 37:51.  2:30/100 -- not that great of a swim time, really, especially since it was wetsuit legal.  However my sliding, traveling lunge upon my exit was amazing and scored a 10 among the crowd.

Made my way to transition and I was off on the bike.  The winds were foretasted to be < 10 mph and out of southeast.  They were more out of the south and more bike >15 mph with some good gusts that got me wobbly.  We had cross headwind out and a cross tailwind back.  For the first 8 miles on the bike I couldn't get my heart rate down and my legs felt like, well, shit.  They felt tired and burning.  To be expected though, since it wasn't my "A" race.  I have to remember that, but still it was completely frustrating.  Athletes were passing me like I was standing still and my HR was not getting where I needed it to be.  Finally, I got it down just a few miles before the turnaround.  Knowing I had been riding well above my heart rate on the way out, into the headwind, I was going to have to take it easy on the way back and recover a bit, if I wanted to be able to run the majority of my run. 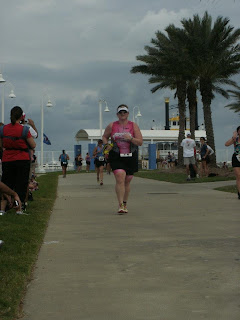 It killed me, but that's what I did.  I watched people pass me and settled for a lower average speed on the bike so I could save something for the run.  I always make the mistake, on this course, on the bike, by not holding back when necessary -- then I'm fried chicken for the run.  I was disciplined nearly the whole way back, but for some reason, even in practice when we get back to the seawall and all the traffic, my heart starts to race for the last 2 miles.  Oh well.  Bike was 1:30:33.  I was a little bummed because I can do this distance between 1:24 and 1:27.  I was just hoping it would pay off on the run.

In and out on the run with very little fuss.  Surprisingly my legs felt better than I expected they would.  I pretty much settled in to 6:1 intervals, but I felt really strong.  Maybe training for 70.3 races is what makes you a good oly racer!  LOL.

Here's the surprised occurrence.  I'm just finishing mile 1 on the second lap, with 2 to go.  I'm going down the street and I see athletes on the other side, coming towards me.  I see 5 different 70-something bibs.  I was number 75, so I knew all those women were Athena, and there was far less than a quarter mile between us.  I was determined to hold them off.  I had no idea if their ages were under or over 40, but it didn't matter.  I stayed the course and tried to push and stay strong.  With less than a mile to go, I looked behind me and I did not see a single on of them.

Me, race?  Yep.  I actually raced.  The same girl who absolutely, positively didn't want to be there at the start.  LOL

Anyway, my run time was 1:24 for about at 13:30 pace.  This is my regular pace without a swim and bike before hand!  Since my PR for a 10K run is 1:21, I have nothing to feel badly about! Plus I negative split my run by about 2 minutes! I crossed the finish in 3:39.  First was 3:21, 2nd was 3:32.  I didn't realize it a the time, but not even 5 minutes after I finished they called the Athena awards.  When they called the Masters category,  they only called 1st and 2nd.  One of my club-mates said I ought to check with the timekeeper.  Sure enough it was me! 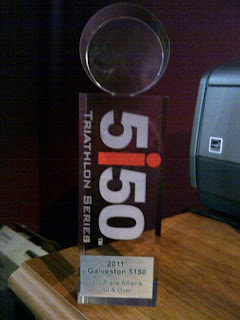 So I won 3rd Place Athena Master, qualified for the Hy-vee 5150 National US Championship race and got a comp'd race entry for that race. Not to mention I PR'd for the distance.   Pretty darned lucky (thanks to that shooting star, changing my piss poor attitude, and the fact that most of the fast Athenas, who always beat me, raced relays or stayed home in bed!

A good day for someone who didn't want to race. :)