November 21, 2011
I signed up for the TX3 triathlon series this weekend.  It was a good deal to register for 3 races.  Kemah (Olympic), Bridgeland (Sprint) and Houston (Olympic).  Those three races, plus Hyvee Nationals, will probably be my season, since I decided to take things down a notch and get the medical stuff straightened out.  Oooh, and I also won a $50 gift card to the cycling shop where the registration was held.  Sah-weeet!

I made it through my on-ramp training sessions for Crossfit.  Man, I will say that it's a ton harder than I anticipated, and I did NOT think it was going to be easy to start.  It's a great kind of hurt though, so it's all good. I can tell I won't be setting any records for a while.  The daily WOD (workout of the day) is timed, and the goal is to do the WOD in the least amount of time. Heck!  I get frustrated in a group X class at 24 when the instructors don't give you proper time to do a technically correct crunch or dumbbell press.  On Fridays there is an Olympic weightlifting class.  I really, REALLY, enjoyed this -- which isn't much of a surprise to me.  I've always liked to lift!  Once Darren heals up, Coach Thea said to bring him -- that will something great for us to do together.  Incidentally, Coach Thea is also my amazing Chiropractor.

In other news, I went back for a follow-up with the Hem/Oc.  Seems my Iron is still dropping (sh*t), but... my Hemoglobin was perfect!  (Yay!)

After my follow-up with the OB/Gyn post-op, she asked my why when my Iron stores were down to "7" that the Hem/Oc didn't order GI work.   It put a little scare in me to hear the word Cancer again, for the third time this year, this time  in the form of Stomach Cancer.

He said there were several reasons:
1)  My history -- I'm an RNY post-op.  There are issues with Absorbtion.
2)  My Age
3)  No bloody stool
4)  Very High Menstrual flow
5)  Tested negative for Celiacs (evidently a potential indicator)

Now he did say that because I'm still dropping, we're going to wait 4 more months (because I've had the ablation -- need to give it time).  If levels drop again, it will mean another Iron infusion and we'll probably go and run the GI stuff.

Ugh... another 4 months of waiting. I am starting to feel tired and lethargic again... had one of those nights where I pretty much passed out on the couch at 8pm.  Hubs commented he hadn't seen me like that in a while.  I went to bed and slept until after 6:30 the next morning, which I never do; I rise and shine at 4:30am!  Saturday night I forced myself to stay awake, but slept hard and felt awful on Sunday morning.  No long run for me, I felt that bad. :( 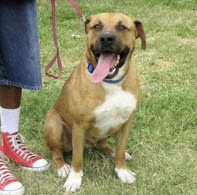 A new addition to our family?  Possibly! Not by birth though, but by pet adoption!  We've been mulling over for a long while getting a dog.  It would be really good for Cassie, and since we know we're not having any more kiddos, it's probably an even better idea.  Cassie and I visited the SPCA on Saturday, just to see how she'd do visiting with a couple dogs, and we fell for "Otis". We brought Hubs back to meet Otis on Sunday, and we put in adoption papers!  We hope to hear something by Tuesday.

We're not sure if Otis is a Lab/Great Dane mix (that's what his crate papers say) or if he's a Lab/Mastiff mix (that's what the website says).  He does have some behaviors that lead towards the Dane side, but when you look at pictures of the breeds it's hard to tell -- because he gets those little expressive wrinkles above his eyes that say Mastiff.  Anyway, he's gentle and Cassie loves him.  He's not a barker or jumper (so the neighbors will love him too!).  They did say that he has "domination" issues, and that if challenged by another dog (where he gets jumped on), Otis will retaliate.  Dogs are dogs, right?  I'm hopeful with some learned handling we can calm the behavior.  It's truly hard to believe though, since he's sooooo laid back.  Even when the other dogs in the kennels were going nuts, he just walks past them like nothing is happening.  No barking.  No challenging them.  Nothing.  So wish us luck -- we'd love to give Otis a family and a home.