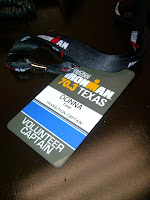 While I'm not the least bit fired up about my race at the end of the month (???), I'm looking forward to volunteering and "professionally" spectating and cheering on my tri peeps!  If you hadn't heard, Lance Armstrong is racing in my back yard!

Unfortunately Chris Lieto had to pull out of the race because of some lower leg issues he's been dealing with for over a year -- he's protecting the rest of his season by withdrawing.  Completely understandable!  He's still going to be there, cheering on the competitors and doing his sponsor thing...  He'll representing "More Than Sport" at the expo -- his organization to raise funds and bring awareness to child s*x trafficking.

And, yes, I'm still not upset I'm not racing.  I'm sure race morning I'll be thinking, "Man, what's wrong with you?  Why didn't I choose to race!"

The race is going to be a mad-house, give the "Lance" factor.  The number of athletes racing this year jumped to 2700, from 1900!  It's going to make for a challenging run, as they changed to a 3 loop course from a 4 loop course!  2700 athletes on a 3 loop course?  It will be like I-45 south, headed to Galveston on a Friday night!

My "Paleo-ness" is still going well.  I'm down another few pounds (Yay!) and up to 1 1/2" off each my waist and hips.  I've been a little tired lately, but I credit stress at work and going to be later than usual for that... basically it's my own fault.

I need to have a good bike and transition run this weekend.  I need it for my head.  All of my riding has been on the trainer and the 2 rides outside have been awful.  I just don't feel ready, like I normally do.  Maybe that's because I really haven't had time to think about it.  Eh, I always get a little off before a race anyway.  One day at a time.  Right?  Right.

Cassie started with a new Daisy troop and is l-o-v-i-n-g her new "sisters."  This is going to be so much better for her.  What's even better is that 4 of the girls from her old troop moved with her.  Awesome!  This weekend we're going to a skate party.  That's right... it's against my better judgement (Pre-race), but I'm going to take her skating!  They are mixing a little community service in with the skate party, collecting stuffed animals for kids who could use something loveable to hug.  :)