Geeez! Give A Girl A Badge!!

April 06, 2012
I was lucky enough land a v'teer position to "protect" the pros at Ironman Texas 70.3 Galveston!  In case you hadn't heard, dude, Lance Armstrong, was racing.


It was exciting and felt really lucky to get so close.  I admit I was a bit chicken to take photos.  The Ironman staff said it was fine to click a few, but keep it classy and professional.  At the last race he did all the transition volunteers left their posts and swarmed the pro racks.  Pretty uncool.  I really didn't take many photos... I never even took out my camera; just clicked a few with my phone.  The few I have aren't that good.  After they came back from the bike a took a few more, but that was it.

I got to transition right a 5am and got my assignment.  I was not surprised by the media, given Lance was racing, but I was surprised how often they would try to get in to the pro area.  I thought it kind of funny, since they have these zoom lenses that would make China look 10 ft. away, so I couldn't understand why they had to be INSIDE the pro transition area.  LOL 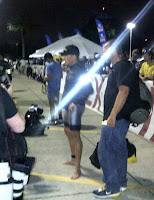 It was a great day.  I think Lance did awesome.  He suffered the start of some GI issues on the bike and pretty much cratered the last of the 3 lap run.  I can't imagine the enormous pressure he must be under to kill the bike portion of the race, and he was being stalked pretty closely.  I doubt he finished with the kind of lead he would have liked going into the run.  There's always another day to race, right? 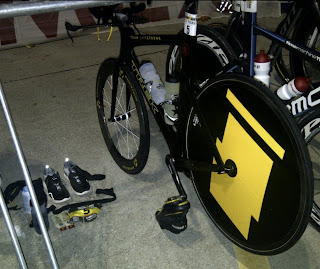 He came out with the main pack on the swim -- he did a 1:13/100m pace -- not THEE leader, but still fast!  He left on the bike in 15th, and made his way back to the front in no time, averaging nearly 28 mph on the bike.  For the run, a 13.1 mile run, he averaged a 6:18 pace/mile.  How people are badmouthing this performance is simply beyond me.  The guy is 40 years old and just getting back... he gets time, just like every other age grouper to figure out what's going to work.  Nutrition is what gets you through a 70.3 or longer.  When he does figure it out, man!  One of my favorite "Lance Moments" was not when he was racing, but it was of his girls, cheering him on during T1, with homemade posters, just like kids would do for any other Dad out there.  It was really fun to see them so excited for him.

One of my other favorite moments was watching Brandon, a P/C athlete who is bind, prep for their race.  One of my club friends said it best, P/C athletes are as "bad ass."  I can't imagine the burden Justin, his guide, carried this race.  No doubt guides have to be strong in their own right -- but to guide another?  That strength is unfathomable to me.  And how selfless!  I mean to put your own goals aside for that day, to help someone else see theirs through?  Now that would be amazing.  What I found so cool was, this Brandon's "guide" talked to him just like any other athlete.  When they came into T1, it was a challenge to get all the gear off and the bike stuff on.  You could see the guide patiently hurrying the P/C athlete.  Justin kept telling Brandon, "You're doing great but you need to speed it up."  This is, after all, a race, right?


Anyway, as the bike went on, several pros returned with flats and injuries. I found it interesting how they have to think about how this race can impact their next week of training.  For instance one guy stopped because his Achilles was "hot" -- he knew if he raced the entire distance it would put him out a week of training -- clearly this wasn't his "A" race.  Another guy flatted and support was too far off to "make finishing worth while."   One female pro fell off her bike and broke her arm -- she'll be out of training for sure.  It all kind of gives you a different perspective. 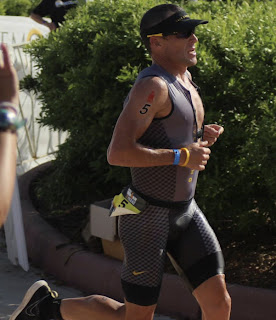