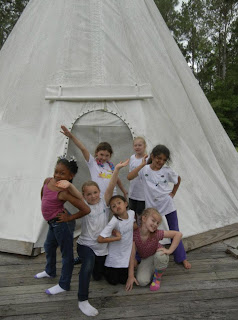 I was a bit worried leading up to the race.  She had "Camporee", an all day, outside event with her Daisy Girl Scout troop on Saturday.  I knew she was going to be spent!  We made a deal though... we would go, but leave by 2pm, so she could get some rest and I could go get her packet. It was a deal.

Evidently it was not a "pinky promise."

There were still some Camporee festivities to be experienced, so I let her stay while I went to pick-up the packet.  This turned out to be pretty good in the end.

I got to the race site at University of Houston, and holy triathlon!  It looked like a 70.3 race is going to happen there, not a kids race!  I mean, I know they kept saying 800+ kids, but the reality of it didn't occur to me -- despite the fact that I've done races with more than 1,000 athletes!

I decided promptly I would sign up to volunteer.  They were going to need it -- each of these tiny athletes would bring with them an entourage of parents, grandparents and siblings.  It was going to be h-e-l-l... and it was making Mommy (me) just a little nervous!

We get home and get her gear together.  She's cool as a cucumber... I'm the one stressing.  Who's racing tomorrow?  Who?  With the way I was acting, not sleeping, you'd of bet the farm it was me!

Rise and shine at 4am. It's early, but she's so excited to go.  I'm excited, but can't relax until I get there and get her into transition.  Of course parents aren't allowed, but this is where volunteering helps (Shhhhh!)   We get her in and my work starts... for 2 hours I'm body marking athletes, listening to disgruntled parents, answering questions and directing traffic.  It was madness.  Madness so long it went down the street and wrapped around the building.


Eventually, everyone made it in, however the race would start an hour late.  The kids just rolled with it (unlike adult athletes!) Nothing but smiles in transition... that is until we hit the pool deck.

I hit the deck and started helping with getting the 7/8 year olds lined up.  I came across two 8 year olds who were so frightened.  It broke my heart! I tried to give them a pep talk, but they weren't having it.  Meanwhile, my kiddo, really didn't want much to do with me!  She gave me a fist-bump and a look like,"Mom, go... I'm fine!"   Okay... I'll go help another kid.  LOL  Seriously that natatorium was so large, I couldn't believe more kiddos were freaking out!

What was cool was her NextGen Coach was helping to run the swim, so when she got up on Deck she had a familiar face.  Now the kids are told they have to enter the water feet first.  What does my kid do?

Yes, she did.  It was awesome!

Hubs got a pic of it mid-flight.

Her 100m swim is consistent and steady and she even passes some kiddos!  Every time she lifts her head to breathe, she's smiling -- that's the best part.

She finishes her swim and sprint over to transition, just in time to see her out on the 3 mile bike.

She left on the bike and started helping in transition.  The kids could barely lift their bikes to hang them back up on the racks!

In no time, and long before I expected, Cassie came back!  She was all smiles and told me, "The bike is my favorite Momma!"  She grabbed her visor, ditched the bike and headed out.  I sprinted over to the finish line up and hill and block away as she started her 1/2 mile run.

I was there for a couple minutes when I saw her make the final turn.  She looked a little upset, but I could still see a faint smile.  My girl was working it!  She did it!  She crossed the finish with a good, solid effort.  She was so proud!

They gave her a place to sit to collect herself.  I asked if she was okay because she looked like she was going to cry.  She said, "I saw the finish and started running faster too soon.  I didn't know if I could keep running.  I didn't want to walk in front of everyone."  OMG -- too funny.   She kept running.

She's done a few races now...  The other two not more than 100 athletes, so I asked her, "Cassie, of the 3 races you've done, which one is your favorite?"