May 08, 2012
Just last week I was reading Jen's story, of her fairy-bike-god-family, helping her get her dream bike -- and now she's living happily ever after.  It's quite a story... sometimes it takes a village and her support system sounds like an awesome group of friends/family so go read it if you like. :)   In fact, the bike she got was also one that I admired as well -- what's not not to like about my favorite shade of "tough" pink. :)

Sooo-ooo... there's this bike I've been lusting over for a number of years... I first saw it leaning up against a tree -- had no idea who it belonged to, but I just thought, "Now that's a pretty bike!"  In general, bikes all look the same -- but this one looks completely different to me.  It's a Fuji D6 Pro.

I dare anyone to say that how a bike looks and it's color scheme doesn't impact their desire to purchase.  I fully admit it; I love how this bike looks -- it's what got my attention.  The fact that it's pimped out with SARM Red -- that's just a bonus.  :)

The other day I received an email from one of the local triathlon groups.  This guy and wife were leaving triathlon behind and selling their bikes. He had purchased the bike, trained and did 1 Ironman.  He had tried to sell this particular bike once before, but couldn't sell it for the firm price he was asking.  Some months later, he dropped the price again and with the exception of one tiny little nic from a rock, it is in mint condition.  It was perfectly kept inside the house.

I did the quick math in my head and thought, "If I sold my current bike and my race wheels, it would wash!"  I started burning up Hubs phone at work we were emailing back-and-forth -- me with "look how pretty?" and him thinking, "Oh no... here we go, she wants a new bike." Because in the name of full disclosure, I had promised, "No new bike until I signed up for Ironman."  My current bike would be completely fine. :)

Hubs, being as supportive as he always is with my dream of doing an Ironman, also knows I've loved this bike from afar. He also knew it was a ridiculously good deal.  The guy was selling the bike for little more than the clinchers alone are worth!  I could easily part the bike out and get more than I paid for it!

So here she is. My new family member.  A friend coined her "Caddie" as in Caddillac... cuz, you know, she looks like one! 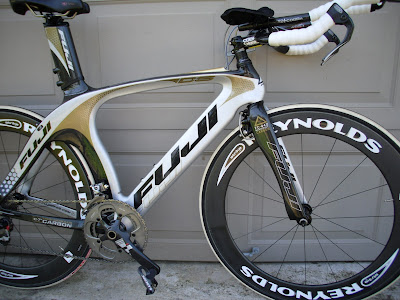 And, she's mine!  I can hardly believe it, really.  I never thought in a million years I would have bike like this.  This is my Ironman bike. One step closer to my dream.

Funny thing is, 3 months ago, I was above the weight limit of this bike.

Today Caddie and I go to the bike fit guy, so he can work his magic.  Wish us luck, that we can make this potential match made in heaven work!