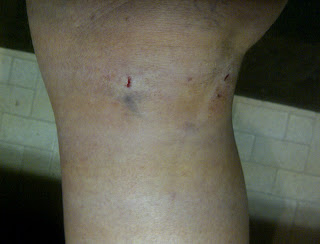 Recovery is going well.  I'm still so very grateful there wasn't a detachment that required a repair, as that would have made for a far worse, much longer and would have required a brace and crutches!  There's still some swelling, and that keeps the joint a bit tight, but I'm doing my leg lifts and stretching my quad -- getting my foot closer to my butt every day.

I'm starting to miss training a bit.  Can't say I'm missing running in the 108 degree weather we've been having the last week, but I am hoping to be able to start swimming and biking here shortly.  I called the Doc's office this morning to see if I could get in the pool and swim, even with a pull buoy, I'd be happier than doing more of nothing.

"CC" said to not pay for coaching for a couple months, until I'm good again.  My CF Coach said, she'll temporarily cancel my membership until I'm back to it.  I appreciate the savings, but it's strange to be "dropped" faster than on a Tuesday/Thursday p'clip ride... and that's fast!  LOL

I stopped by my chiro's office yesterday to get my "Unboken" tee shirt.  It makes me miss being around the very people who help to keep me inspired and motivated.  In fact, this week, I thought I might go to Tuesday morning track just to do my leg lifts and stretching, just to be around everyone for some motivation.  Before I left I Doc T. if I could come "play" on Friday, at least do some upper body stuff and just move.

I won't be racing at Y-Freedom this year, but the RD was nice enough to let me defer my already complimentary entry, so that made me pretty happy.  That was something she didn't have to do, so I'm going to make sure I give them some volunteer hours to show my appreciation.  I still have River Cities on 8/5 and Houston Olympic Triathlon on 9/25 to look forward too.

Not sure I mentioned it; I probably did.  I decided, firmly, that I won't be going to Hy-vee Nationals.  Nationals is on 9/2.  There is no reason to travel to a race, and spend that kind of money, when I won't be 100%.  I don't want to go and just be 90%.  I can do that here, for a lot less money.  I am going to contact them and see if they'll defer my qualifying spot until 2013.  Not sure they'll do that, but given the injury, surgery and recovery, they might?  Who knows?  It's worth a shot. 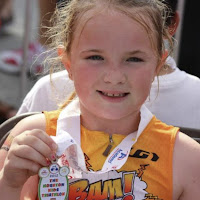 Cass-a-frass gets to race this weekend.  The Kiwanis Kids series tri is in Pearland on Saturday.  As hot as it has been, I'm tempted not to let her do it.  On the other hand, she spends 80% of her day outside at Day Camp, so she's acclimated to the heat.  I want it to stay fun for her!  It will be early enough in the day so won't be as bad as it could be... I hope!

She's been having a great time this Summer at Day Camp (the local YMCA).  She's swimming like a fish, Mon-Thu at the Y in the morning, and then with the Sails team 3 afternoons per week.  She absolutely loves it and she's making good progress.  What I'm most proud of his her good attitude.  She just doesn't give up.  She might get a little upset at something, but she's tough, and goes right back to it. She's been to several meets since late April and really loves being with the team, swimming and cheering for everyone.  She's such a good little sport about it.

Hubs has been fighting the new-bike-bug since I brought "Caddie" home.  He stopped fighting and finally succumbed.  I placed his final bid on a Matty Reed edition of the Fuji D6 Frame for him.  It's every bit as pretty as "Caddie", but in a lime-green.  Of course this shows it all decked-out, but we only bought the frame -- he now has another project in disassembling his "Frankenbike" and moving the parts to his new, sweeter ride.


This not training period has been a test of motivation on so many levels.  My weight has been holding steady without any real exercise.  If I'm keeping it real, for the last 2 weeks I've been Paleo only 80% of the time.  Still mostly good, but not perfect.  What I've noticed right off is that my skin is dry and flaky.  That seemed to happened after I let a little dairy Milk  and little wheat back into my diet.  I'm back on, so I'll be curious to see how quickly my skin returns to normal.

Oh, wait, one more thing.  Oh wait... I'll write a separate post about what's on my mind, because it deserves it.
Cycling Family