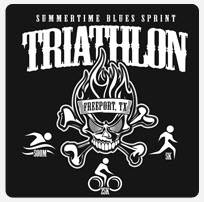 I've always volunteered for STB and never raced it. CC is now one of the Race Directors.  I had an entry for the race last year, but got real sick, so they let me defer to this year.

Post Rivercities my knee was pretty jacked up.  Couldn't really do much besides swim and bike.  Tried a treadmill run, but it was painful.  Had Doc T.  work on it, and by the time race day came it was just Okay.

My bike felt pretty good just under 16 miles in 54 minutes, include a short, but totally steep bridge, which I was not prepared for!  Let's just say it was a long 4mph climb, only to go 32 mph on the downside!  It was totally fun!!! 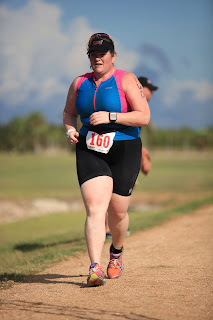 My run, again, was mostly a walk.  Knee was killing me the entire time.  Total time was 1:59.  Not impressive, but still had fun just the same.

Race was great. Covered transition wa nice idea, but the ground was totally slippery, especially for those in the last wave.  I nearly ate it, twice.  Race shirts were cool - who could pass up flaming skulls?  The guitar pick keychains instead of medals and cold doo-rags instead of finishers towels were a nice touch too, all in theme with the Freeport Blues Festival.

he best part????  The indoor post race party, the full breakfast cooked by the city and the freakin' cake balls at the finish!


Next races are relays...  Swim/Bike at Galeveston 5i50 and Swim at Onalaska Half :)  After that I'll be focusing on my Houston Aramco Half Training and IMFL!
Race Report