It has been quite a while since I last posted, and pretty much a year since I've blogged routinely.  There's a reason for that... I just wasn't motivated or inspired.  My "plan" didn't go as expected, and I was less than inspired.There really was no reason for it either, since I knew it would happen, the skin removal surgery, that is. Such a waste of time and energy, being down about it.


The good news is, it is done. Now it's time to work.  Now it is time to move forward!

So a couple Saturdays ago I was in Panama City... Panama City Beach, FL to be exact.  There would only be 2 reasons I would be there the same weekend as Ironman Florida.  to 1) Volunteer or 2) Sign up for my first 140.6!

I can hardly believe it.  Just like that, $1,000 spent between race entry and week long condo stay!

What the heck is wrong with me?

353 days on a journey a better version of me, mentally and physically... and learn to really believe that fear is a liar.  I am limitless, despite what has been programmed in my silly mind.

It's not going to be easy, but nothing worth doing ever really is.

Outside of registration we had a great time volunteering and spectating.  I took a unique-for-me volunteer assignment and chose to work timing -- usually I hang in transition (much easier to cheer-on your team mates there!).  This time, we started with timing at the swim exit.  It gave us a great view of the swim start so we could get an good idea of what to expect.  The water was pretty active this year, but once you made it past the breakers, it was fine, so all the athletes said.

We were tethered to our Ironman staff leaders until 10 AM, so they had us working next at the bike out.  The bike out was one of the hardest jobs... we had to document the number of each bike leaving transition, as backup to the chip.  My throat was sore from calling out numbers, my hand cramped too!  Clearly I was dehydrated. LOL I didn't get to actually spectate much with this job, which was a downer because I had friends racing, but I was happy to know that if someone had a chip problem, we'd have at least some of the data to help resolve their bike out time or swim/transition time.

The staffers then took us out to the run course to place the timing wires for the split reporting.  We got to cruise in their 2014 Ironman Mustang.  It was awesome way to get a view of the entire 2-loop run course!  This part was bonus.  We thought we just be timing at the swim.  Getting to see the entire run course, before you race it, goes a long way for you mentally.

After our tasks were complete, we went to Waffle House to grab some b'fast.  We had a front row seat to watch the bikes roll in, in groups of 20 or so, then nothing for a while... then another big group.

Amy and I rented a 2 seater scooter-go-cart-thingie and made our way to the run course to cheer everyone on. 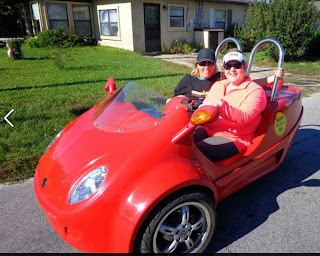 On the run course we FINALLY got to see some of our club friends, which of course is cause for cartwheels and photos!  I only do cartwheels for Ironman.  :) 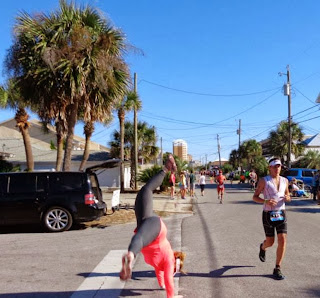 Sadly , we didn't have this scooter near long enough.  We did take time to stalk the remaining bikers on the bike course and cheered them on... okay, we spurred them on to race us in our "dragster".

We got a brief rest at the hotel and then it was back to the Finish line to catch some newly born Ironman athletes!  Typically I love this job.  It makes me happy and sad, but always leaves me inspired.  Although this time the finish line was highly congested and that really sucked some of the enjoyment out of it.

On top of the regular media, there was additional media for the "Sheiks" who competed from a "Far-far Away".  In fact they had a complete entourage with them the entire race.  It looked to me there was lots of pacing going on.  Ugh.  Whatever.  What made me most angry was how these entourages, and others from the Ironman Foundation, felt some sense of entitlement... like they owned the Finish line.  It was all just extra frustrating because everything was so congested.  It really it was not laid out well at all (sorry Finish Line V'teer Captain -- nothing personal, but the exit could have been far better coordinated).

We went to Florida with one mission... to get registered.  There were doubters among us though, bringing us down (not really, but it makes it sound so much more dramatic), worried some kind of logistical change would happen and well, we'd be screwed.  Really, it was simple...

Volunteers get preferred registration the day after that.  Period.  End of story. You just can't give doubt any energy.

Even though registration didn't open until 9, word on the street was people start getting in line at 5 am! The Athlete Coordinator told me people were camped out at 12:30 am, and were made to leave the premises.  This race is both a fast course and a first-timer 'friendly' course.  People love it and it sells out each year in just minutes once it goes online.

As CC (Cranky Coach) told us, "You have one mission while you are there. If you don't achieve it, you didn't want it bad enough."


Time passed in the line so quickly.  Lots of tri people.  Lots of excitement.  Lots of nerves.  Lots of doubt.  The next 365 will erase all doubt and negativity.  Because once you go in this tent... 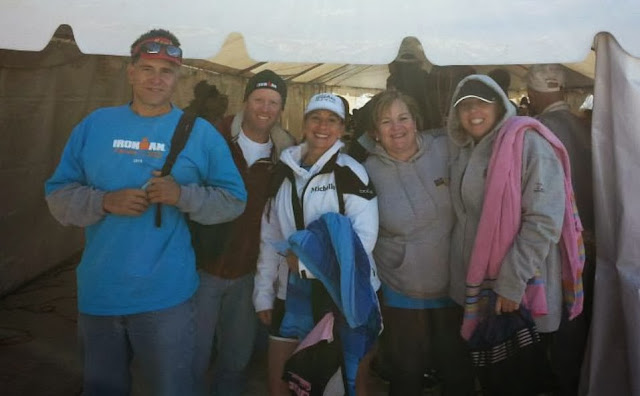 and come out the other side, it is the first "transition".... 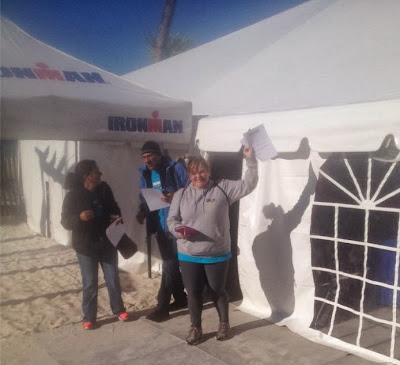 There is no more room for doubt, negativity or self-destruction.  There is only room for deprogramming false truths, moving through vulnerability, building fearlessness, consistent training, trusting your coach and maintaining a deep-rooted belief that you are an Ironman athlete and you will succeed.


Lastly, none of this would be happening without the support of my Husband and my Daughter.  They know there will be some sacrifices in the coming year.  They also know I have promised to make the best choices possible to minimize family impact and keep balance.  They know too, that the last few months will be the toughest in every way.

I love them not just for their support of this, but because they still love me, even when I am hard to love.
140.6 IMFL

I'm alive, just been real busy and haven't had much time to write anything meaningful, or even meaningless in my blog. LOL On the post-op front things have been going well, albeit slow. That's okay though. My measurements are showing progress and that's what's important. Work has been crazy-nuts, but I am making my way through. Next week I'm off to Salt Lake City for training. I'm excited because I'm going to try skiing for the first time while I am there! Here are some more progress pics. I'm 11 1/2 weeks out today and down 55 lbs. I am, however, going to start to weigh monthly. I think it will be healthier for me mentally. For my updated measurements, click here .
Read more